We fancy a nice quiet country route this time – last trip we went to Edinburgh so more of a ‘City Break’ – this time we want peace and quiet and the smell of the country! 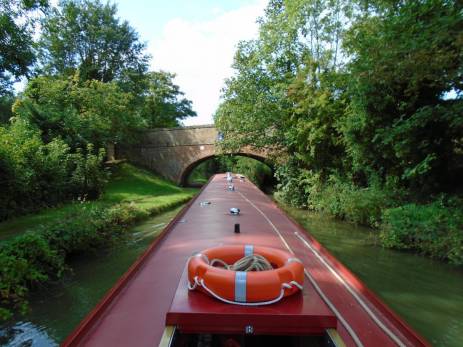 So off to Rugby we go with the intention of doing the scenic Ashby Canal – Rugby is situated at the end of an arm around 250 metres long, off the Oxford Canal and about an hour and a half’s drive from us so we plan to get there at about 2pm and in fact arrive at 1.30pm and our boat is nearly ready. We don’t need much of a ‘handover’ from the team there as we have been boating many times and are also familiar with Alvechurch boats – this one is a Warbler – 69ft long with up to 8 berths. So very spacious for just the two of us!

We are soon off and at the bottom of the arm about 5 minutes cruise away, we take a left turn onto the Oxford Canal. From this junction it’s about 5 hours cruising to Hawkesbury Junction where we will join the Coventry canal for a short while, so we’re not planning on getting there tonight – instead we will moor up in the countryside and eat supper on board. It’s a glorious sunny afternoon, though fairly cool and we think how lucky we are to be out on the cut for the second time this year!

We look at the guide book (Nicholson’s 1) and decide to get beyond the M6 motorway bridge, so on past Brinklow and moor up in a quiet spot. The scenery is gorgeous but we know this one spot by the bridge will be noisy so we want to get past there to moor for the night. So that’s what we do – we eat on board tonight and then play some scrabble and go to bed where we both sleep very soundly after a busy day!

Next morning we have an early breakfast and get on our way – Hawkesbury junction is about an hour away and where we join the Coventry Canal and we are intrigued to see what it looks like – there is a  very fine pub there called The Greyhound Inn (02476 363046) which apparently does super food too if you fancy it.

Before we take you there though, let me just tell you about one of the most bizarre sights we have ever seen on a canal or indeed anywhere in Britain. Not long before the junction we cruised by a series of old boats moored up, obviously private boats, and mostly in a state of some disrepair – but on the canal side there was what amounted to a kind of tableau - of various mannequins and figures, both human and animal dressed in different costumes, there was an army soldier in his camouflage tent, a petrol pump attendant, the Stig, fairground horses, gorillas, skeletons, a seaside lady, and on one of the boats a series of bears dressed in what can only be described as various stripper outfits…. the most grotesque and bizarre display I have ever seen! Aren’t we British fantastic in our eccentricity? I have since googled madly trying to find out something, anything about what it all meant but have failed abysmally I am sorry. 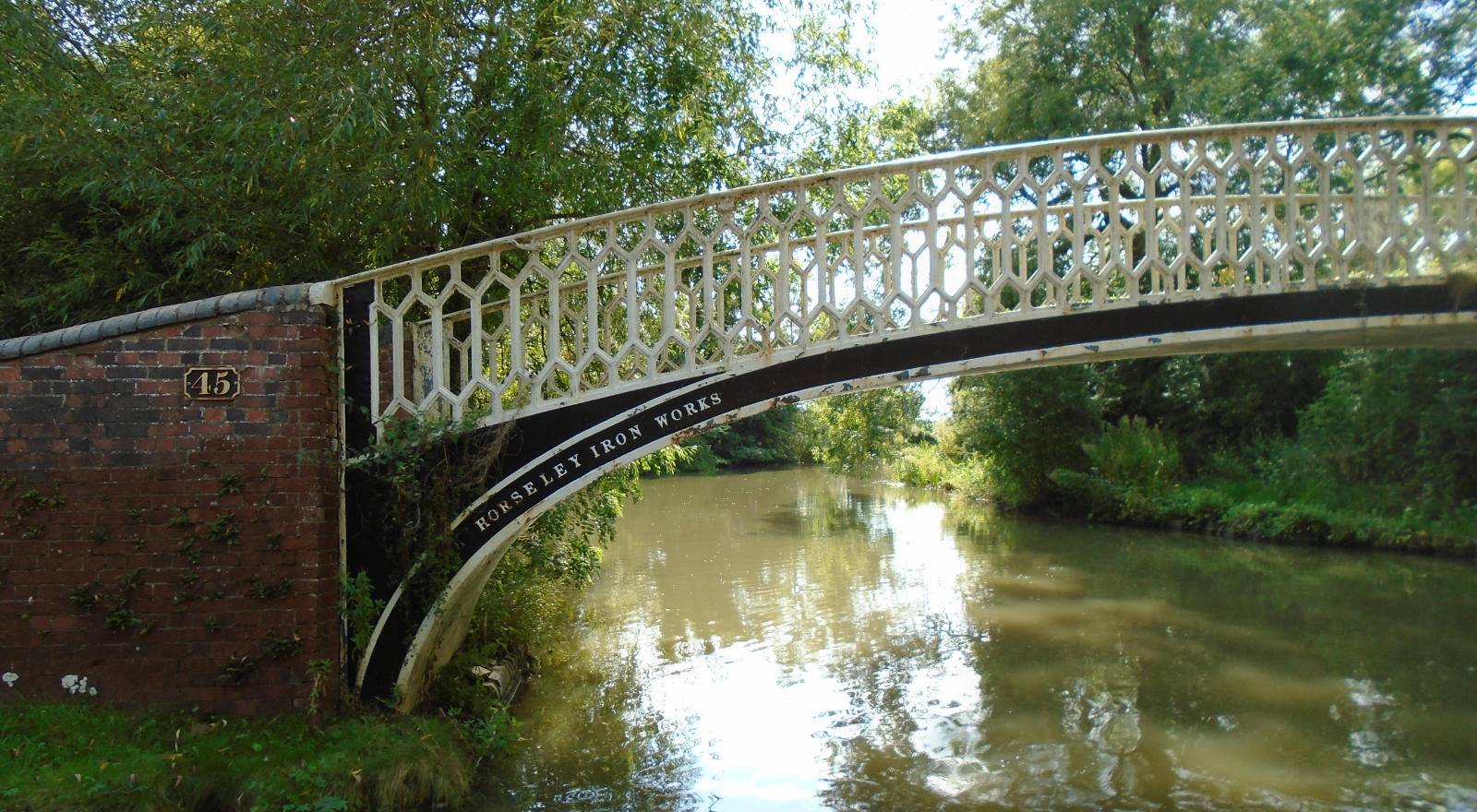 The lock at the junction (the only one on this trip) is really not a lock at all. Rather a ‘stop’ lock – in the old days they used to charge you to leave one canal and join another and this was a way of ensuring that the boats stopped! The lock itself is less than a foot deep! You can barely tell which paddle needs opening! Anyway we’re through it very quickly – and then there’s a really sharp right turn and we’re on the Coventry Canal – heading away from Coventry – if you took a left turn here you’d end up in the centre of Coventry and that’s another ‘City Break’ so maybe another time! We’re travelling north on the Coventry Canal now heading for Marston Junction, the gateway to the peaceful and tranquil Ashby Canal. It’s only a couple of hours away and we have moved from the Nicholson’s 1 guide to the no. 3 now so we can see it is right after Bridge no. 15  It’s another quite sharp right so take care – our boat is 69ft so we end up with our stern in the opposite bushes but emerge unscathed and are on the Ashby Canal before we know it and immediately going under Bridge No. 1!!

The Ashby is a lovely peaceful canal apparently famed for its wildlife including water voles and we are excited to think we may spot one because through all our years of narrow boating we have never yet seen this elusive little creature. We travel on and moor up at Hinckley on a lovely stretch of really good moorings just after bridge 14. There are a couple of pubs here too The Lime Kilns Inn and The Marina, but I’m ashamed to say there’s also a KFC just around the corner and we indulge our guilty pleasure by sharing a bucket! 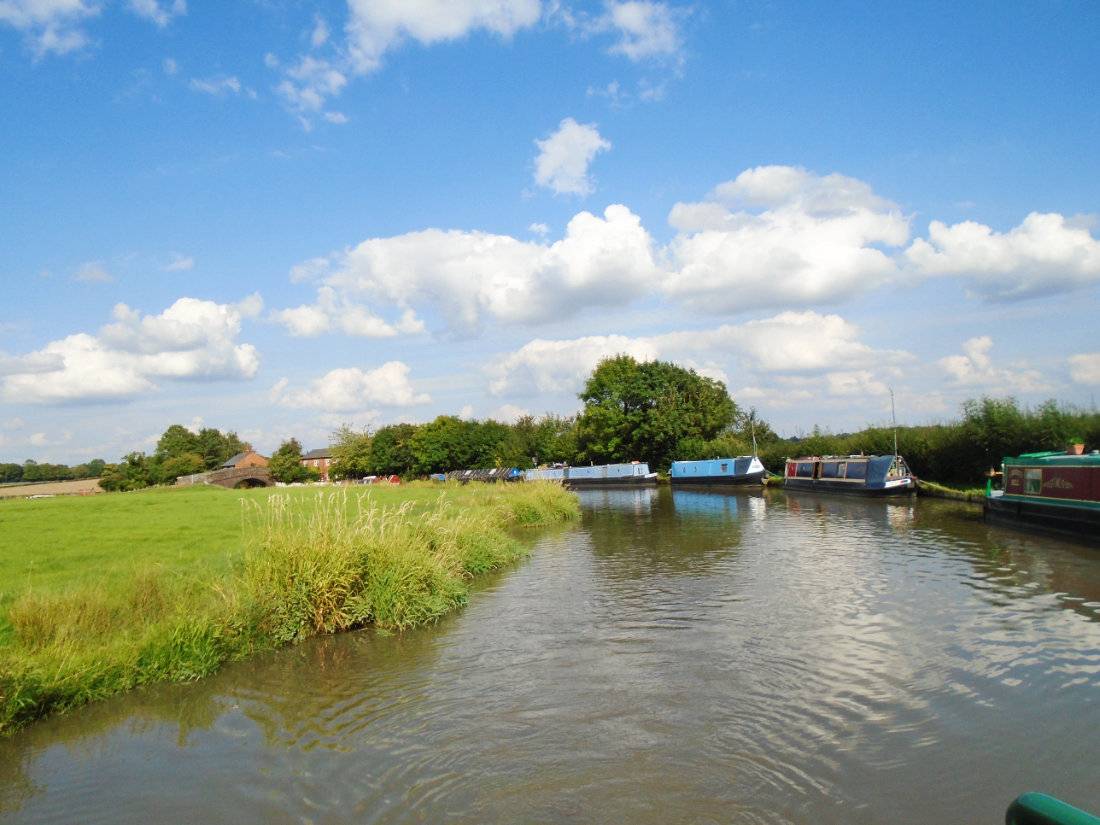 The next morning whilst having a coffee on the bow of the boat we finally get to see the Holy Grail – opposite us in the reed banks we watch a couple of water voles going about their business, diving and coming up and washing their heads with their little feet. My trip is made! And to cap it all when we finally get going we spot one running alongside the boat on the towpath side, virtually opposite The Marina Inn at Trinity Marina.

Carrying on that day we are passed by many old boats – it appears that we are meeting returning traffic from the Shackerstone Family Festival! Apparently this takes place the first weekend of every September and lots of historic boats take part – here are a few for you to look at!

We keep on cruising, mooring up for a sandwich near Sutton Cheney Wharf (which is near the Bosworth Battlefield Centre if that sort of thing takes your fancy) and then carry on until early that evening we reach Market Bosworth itself and there are some decent moorings and a water point just past Bridge 42 and Bosworth Marina. We fill up and move on to moor up and then Simon strolls into the village for supplies – i.e. wine! He is gone some time and on his return explains that whilst on the map the village looks like a hop and a spit away in fact it is a good 20 minute walk – just over a mile he thinks and uphill on the way back - so be warned!

Next day – Tuesday and we plan to reach Snarestone and turn there to come back again. Now that we have passed all those historic boats the canal is very quiet again and lovely and peaceful with nothing to do but trundle along at a steady 3 miles per hour enjoying the views and the smells of the countryside. We reach Snarestone having passed through Snarestone tunnel and then decide to turn and go back through to moor up at a pub we’ve spotted called The Globe Inn. We’re going to eat out tonight!

And we are very glad we did as it was exceptionally nice food and reasonably priced, although not cheap. It has a 4.5 star rating on Trip Advisor, well deserved.

The next morning – Day 5 we start our journey homewards and arrive back in the marina Friday evening to stay overnight for a Saturday morning departure. The marina have advised us to come up the arm slowly and use the purpose built winding hole opposite the marina buildings to turn the boat and then reverse into a mooring position. We managed this quite easily though we had been a bit concerned but it’s easier than it sounds so don’t panic!

download a pdf of this blog with more photos