Once again we are off on a canal adventure – this time on the Grand Union canal, one we have never been on before – we even have to get a new guide! Leaving from Gayton Marina we will be a party of four – myself, my husband Simon, Sarah my daughter and her boyfriend Ben.

Despite it being the last week of the season – October half term, it is un-seasonally mild and we arrive at Gayton Marina in glorious sunshine – the leaves on the trees are golden brown and not many have fallen yet. 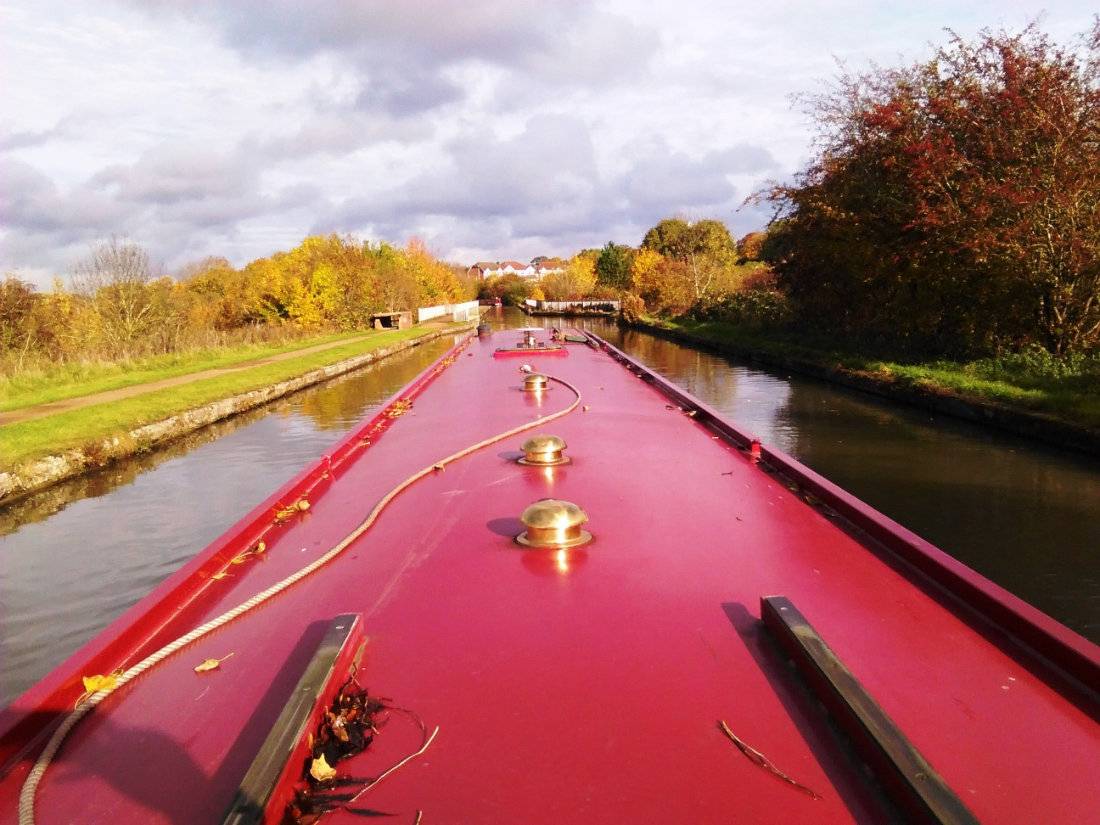 We arrive on a Tuesday - unusually we have been able to book a boat that normally would have gone out the previous Saturday which means we are taking a 4 night break as opposed to a 7 nighter, but we have arrived at midday much earlier than the normal pick up time.

We plan on going southwards towards Milton Keynes for the 4 nights only 16 locks in all and it looks like lots of nice places to stop too. Chrissy, the marina administrator who i have spoken to many times on the phone in my capacity as a booking office administrator for ABC boat hire greets us and also introduces us to Wim ( I know, unusual name! ) an engineer. Wim explains to us the workings of our boat which is called Capped Heron, including how to use the diesel powered fuel stove how cosy!

We drive our car down to the canal side to unpack and after we have unloaded our cases and stocked up the fridge, we park the car back in the secure car park. Capped Heron is facing north at the moment; if we were to cruise onwards we would end up on the river Nene and this is not what we want, so very kindly, Wim reverses the boat down to the arm , spins us around and we are off.

It is so lovely to be back on the water again and the added bonus is the beautiful weather. The forecast for tomorrow and the following days is not so good though so we decide that this first day, as we have got away at a very reasonable 1.30pm we will not stop at Stoke Bruerne, which would be the normal first night stop but go through the seven locks there and if we get as far as Cosgrove we can eat there but if not then we have food on board for an evening meal. We cruise very gently down the Northampton arm to Blisworth junction and turn left onto the main arm of the Grand Union and in about an hour we are at the amazing Blisworth tunnel. We have been told that this is wide enough for 2 boats so we don't have to worry about bumping into anyone, just keep to the right. 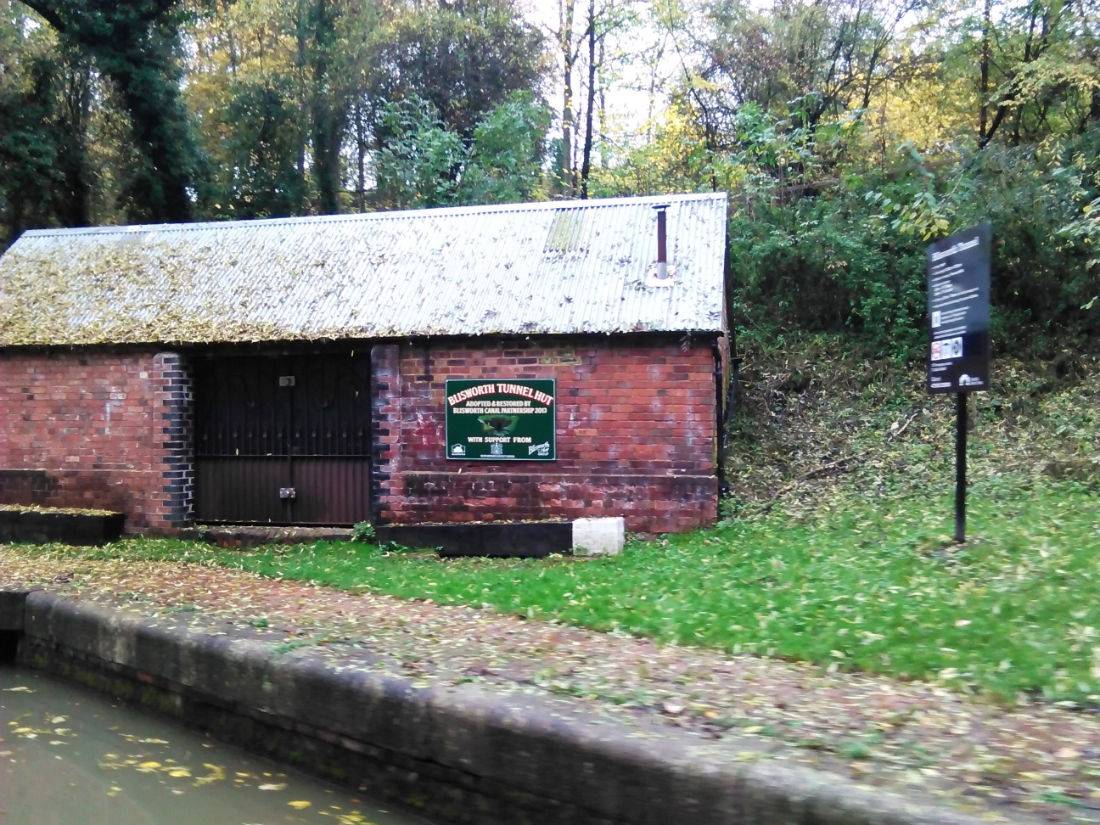 We turn on the headlamps and go in. It really makes you think how this was done. The huge amount of work and toil and downright sweat that it must have taken to build such a thing over 200 years ago. After around 45 minutes the rising moon in the far distance becomes the exit to the tunnel and we cruise out into what seems like blinding sunlight! Under normal circumstances this would be the time to start looking for moorings there is plenty of space and it is only a short walk from here to Stoke Bruerne with its 2 pubs, Indian restaurant and National Waterways museum. A very good place to stop if you started travelling between 3 and 4pm.

However we have decided to go through the locks so we plough on. There are two locks by the Boat House Inn and the Navigation and then after a short walk down the towpath another three followed by another two. Sarah is an old hand at the locks and although I help with the first couple, she has soon taught Ben the ropes and he becomes her lock buddy! Along this stretch as I have said there is quite a choice of places to stop and eat, as well as the museum. We didn't visit the museum either going or on our way back as the timings were wrong but we were told that quite a lot of money has been spent on it over 1m in fact and it is well worth a visit.

At Bridge 54 by one of the locks there are some rather colourful mosaics as well. Because it is quite a famous area of canal with the museum and the tunnel and because there are quite a few locks here it tends to mean that there are always people around plus this is half term which automatically makes it busier anyway. We have quite an audience through the first few locks and offers of help which is nice but thankfully unnecessary. Once through the locks we travel into countryside again and as the light starts to fade we start looking for moorings we have underestimated the amount of time the locks will take and it is getting very near dusk.

We really are not going to make it to Cosgrove for that pub meal so we moor up just past bridge 60 and cobble together a chicken curry, have a game of cards and its time for bed. The next morning Simon and i are up bright and early a bit worried we may have come loose from our moorings we put those pins in last night in the dark! But we are quite secure of course, as usual, over thinking it! We take a look at the map and work out that we are at a village called Yardley Gobion. We think that if we walked over the bridge we would be in the village and according to the guide book there is a pub there called the Coffee Pot tavern so we could have had that meal after all!

After a very hearty breakfast we set off again. We cruise slowly and sedately through miles of countryside passing lots of different wild life - herons, pheasant and the occasional bicycle (! )we stop at Old Wolverton there are good moorings and a sign tells us a short walk to the shops. Simon, Ben and Sarah toddle off for an explore while I do a bit of tidying up and have a read. They are soon back with more provisions; chocolate and wine, most important - there is a Tesco apparently just a few minutes' walk from where we are moored, we have some lunch and start off again.

We are aiming to be at the Plough at Simpson for this evening's meal the plan is to moor there then tomorrow travel onwards to the lock at Fenny Stratford, go through that and then turn at the winding hole beyond and start back again. So we carry on. When you look at the map in the guide book it looks like the canal is hugging the outskirts of Milton Keynes, and the places we are passing through Old Wolverton, and now Stantonbury Park Farm, and soon coming up, Great Linford - are all suburbs of the town. The overall feeling though is of countryside - at one point we even spot a kingfisher! Unfortunately I am not fast enough with the camera, but that flash of blue was unmistakable! But also and i suppose this is an advantage of being near a major town we are passing several pubs, the Galleon looks rather nice and so does the New Inn and the Black Horse. 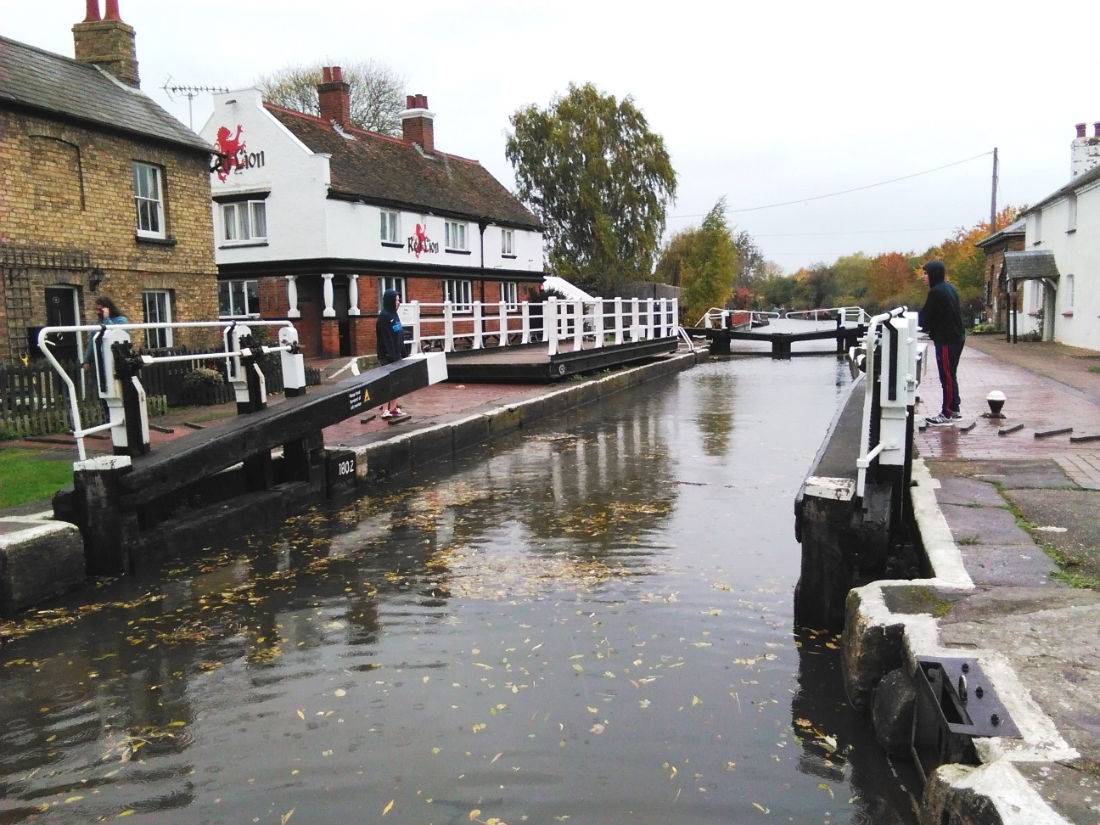 Onwards we go there is always something interesting to look at whether it be an unusually named boat, an interesting garden (the folks that have gardens by canals always seem to have a more interesting garden than I do! ) or spotting something of interest architecturally. Great Linford's a medieval village and you can spot Gothic style church turrets in the distance like mini castles. We finally reach our destination at Simpson and moor up. We have telephoned ahead to book a table for tonight (the Plough 01908 691555) and were advised to get there early rather than later so we arrive at around seven. The pub has been recently renovated and the restaurant is lovely, think stone floors and oak furniture, leather dining chairs and the menu is Italian and although simple when the food arrives it is tasty.

Back on the boat we have a few drinks, watch The Apprentice and its time for bed. Next day we are up bright and early.  Today is turnaround day, we have to go through the lock at Fenny Stratford and then use the winding hole just past Bridge 96. We have been told that this lock is quite unusual and when we reach it we can see why - there is a bridge in the middle of it! And the lock rise is about 2 inches hardly a lock at all. The bridge must be left in the open position once we have exited but as we know we are returning very shortly we leave it and sure enough about 20 minutes later we are back again! Today we are planning on getting as far as Cosgrove to the pub we had been aiming for on our first afternoon.

Then on Friday we plan to get to Blisworth leaving less than an hour to travel back to Gayton on Saturday. So its back the way we came - the Barley Mow at Cosgrove was very nice they serve steaks on a sizzling platter which sets off the smoke alarm! And the Royal Oak at Blisworth is great too - a converted barn attached to the pub has been set up as a restaurant they have just opened and it was very quiet, just one other couple and us but the food was great would definitely recommend.

We cruised into Gayton marina at around nine on Saturday morning and were home in Worcester by eleven. A smashing time was had by all!

download a pdf of this blog with more photos