A route with a mix of rural and urban, it takes in parts of the Worcester & Birmingham Canal, Birmingham Canal Navigations, Birmingham & Fazeley Canal, Coventry Canal, Trent & Mersey Canal and Staffordshire & Worcestershire Canal. The Ring from Alvechurch includes five tunnels (two of them twice!), several aqueducts, and 79 locks - can be done in 7 nights or a more relaxing 14 nights.

This route can also be started at our Gailey Marina.

This is a journey of junctions – Salford, Fazeley, Fradley, Great Haywood, Aldersley - from the sprawling green territory of Cannock Chase to the historic canal basin in Birmingham city centre. Your route swings from lock-free relaxation to energetic lock flights, from rural to urban, and contrasts the winding and straight routes by two of the greatest canal engineers.

Setting off from Alvechurch Marina, follow the Worcester & Birmingham Canal north under the bridge past the village’s back gardens. The canal turns sharply under the noisy M42 then crosses the valley on a high embankment with fabulous views over Lower Bittell Reservoir. There are two reservoirs at Bittell, both built by the canal company, the larger being used to feed water down to the canal via a feeder. Both are now idyllic spots for bird watching and angling, and the larger Upper Bittell Reservoir also has a sailing club. Through a wooded cutting you arrive at Hopwood before leaving the lush Worcestershire countryside behind to disappear into the immense Wast Hills Tunnel (2,726yds/2,493m long). You emerge from the tunnel a short distance before King’s Norton Junction, where the Stratford Canal heads east to Stratford-upon-Avon.

A treat soon spikes your journey. Mr Cadbury built his chocolate factory and Bournville village for his workers on the canalside over 200 years ago. Today, what chocoholic could resist stopping off for a while to visit Cadbury World? And if time allows, it’s worth a wander round Bournville village with its quaint green surrounded by shops, overlooked by a statue of George Cadbury himself from the Quaker Meeting House.

The canal continues north beside the railway line. Just beyond Selly Oak, you pass the campus of Birmingham University then the expanse of Queen Elizabeth Hospital. Through the residential area of Edgbaston, characterised by white Georgian buildings, the canal skirts the edge of the Botanical Gardens before the short Edgbaston Tunnel(105yds/96m long). The last mile into Birmingham is a mix of old and new as the Worcester & Birmingham takes a sharp left turn at the Mailbox (the former Royal Mail sorting office, now a mix of designer shopping, bars, television and radio studios) to join the Birmingham Canal Navigations (BCN) at the ‘Worcester Bar’.

The great spaghetti of canals that converge in Birmingham was once the beating heart of the Industrial Revolution. Cargoes of coal, glass, porcelain, chocolate crumb and the heavy trade of the Black Country were carried by canal boat to and from Birmingham. The big business of Britain’s canals was to link the nation to world markets and in fierce commercial battles between the canal companies, the daily plight of boat crews sometimes petered into insignificance. Water was precious to competitive canal companies and, in a bid not to lose any of its canal water, the BCN insisted a solid bar was built to separate its canal from the Worcester & Birmingham Canal. The ‘Worcester Bar’ was built in 1792 and remained in place for 30 years, forcing canal workers to lift cargo over the bar to load and unload clumsily from boat to boat. In 1815, everyone huffed a sigh of relief when a cut was made and the Berlinesque bar was penetrated. The lock has gone, and boats roam freely today, but the bar is still visible to the informed tourist eye.

Gas Street Basin gives a clue to its importance in its name, as it was the first area in Birmingham to be lit by new-fangled gaslights. The neon lights of the modern city reflect a different millennium over Birmingham’s canals now, and mark the ever-evolving meeting place of old and new. Boats cruise into Birmingham through the backdoor, yet arrive at its thriving heart. The bronze bull of the Bullring, the markets, Antony Gormley's sculpture, designer shopping, multi-cultural panache and a spectacular controversial library - that's Birmingham. Yet first impressions don't give away the city's biggest secret. It is at the heart of Britain's canal network and spaghettis more miles of water than Venice (over 100 navigable miles of it!).The historic waterside hub is alive with bars and restaurants. Symphony Hall, ICC, Barclaycard Arena and Brindleyplace spoil visitors with choice, Birmingham’s famous markets are a short walk from the canal, and there are art galleries, museums, theatres and dizzy opportunities for shopping too.

After taking time to explore, you leave the city from Old Turn Junction along the Birmingham & Fazeley Canal via a quick succession of locks - the 13 Farmer’s Bridge Locks followed quickly by the 11 Aston Locks, taking you down to Salford (or Spaghetti) Junction and a right turn past the city’s trailing outskirts. Back in the countryside and through the diminutive Curdworth Tunnel (57yds/52m long), the 11 Curdworth Locks take the canal down to Fazeley.

At Bodymoor Heath, Kingsbury Water Park lies to the right of the canal. The park was created from industrial gravel and sand extraction pits, and the resulting 600-acre park has around 30 pools and lakes. A Visitor Centre sets out the history of the park, and as many as 230 different species of bird have been spotted here so a must for any twitchers on board. And just before the junction, you may want to moor up for children aboard who want a quick detour to Drayton Manor Family Theme Park.

Turn left at Fazeley Junction to head through open countryside. Although the Coventry Canal heads northeast at the junction, the Birmingham & Fazeley carries on for a couple of miles to the northwest, as the Coventry Canal Company ran out of money at Fazeley – though they later managed to buy the section from Whittington through to Fradley Junction, now a stranded part of the Coventry! No mooring is allowed by the wooded hillside at Hopwas as this is the Whittington Firing Ranges (look out for danger flags!) A stone by bridge 78 at Whittington marks where the Birmingham & Fazeley Canal changes to the Coventry Canal, and just beyond is Huddlesford Junction, with the short remains of the Lichfield Canal now providing moorings.

Continue north to Fradley Junction where the Coventry Canal meets the Trent & Mersey Canal. This is a bustling hotspot with pub, teashops and an award-winning nature reserve. Head west along the Trent & Mersey as it climbs past woodland and winds slowly through glorious countryside, with a lock-free nine miles after Wood End Lock. The River Trent comes close as the canal passes through Handsacre and Armitage, best known for Armitage Shanks bathrooms but also with links to the pottery family made famous by Josiah Spode the Elder. Just outside Armitage, watch out for oncoming boats as the canal narrows to one boat width where there was once a tunnel.

The chimneys of Rugeley’s power station can be seen as you pass the town, then the canal crosses the River Trent over an aqueduct and the river stays close for the next few miles. The huge expanse of Cannock Chase lies to the south. This Area of Outstanding Natural Beauty (AONB) covers 26 square miles and was once a Norman hunting ground. A herd of fallow deer are descended from generations of deer who grazed here.

Passing through Colwich Lock, one of this journey’s highlights, Shugborough Hall, peeps over the canal and calls you to visit. The estate, dating back to 1693 and now a National Trust property, was once ancestral home of the Earls of Lichfield of which the 5th Earl, Patrick Lichfield the photographer, was perhaps the most well-known.

Above Haywood Lock, you reach Great Haywood Junction where the Trent & Mersey Canal carries on northwards while you take a sharp turn under the historic bridge to follow the Staffordshire & Worcestershire Canal. The canal crosses the River Trent on a small aqueduct and after a short tree-lined stretch arrives at Tixall Wide. In the 18th century Clifford Thomas occupied Tixall Hall, and when canal builders first arrived to dig an ugly water-motorway of his era, he was ferociously unimpressed. To avoid spoiling his view from his window, he insisted the canal builders widened the water to disguise it as a little sweet lake. The meadow alongside the water is a Site of Special Scientific Interest and home to a variety of nesting birds, so it's a good mooring spot to linger.

The pretty lock cottage at Tixall Lock has views across fields towards the castellated entrance to Shugborough Railway Tunnel beyond. A four-mile stretch without locks follows the River Sow for much of the way, until just beyond bridge 106 where the canal crosses the river on the aqueduct built by James Brindley. Between bridges 98 and 99, you could take a bus along the A34 to visit the county town of Stafford.

A series of locks gradually lift the canal to Penkridge, a small town with a locally renowned weekly market, and a history that spans coaching inns, racehorses, canals and railways. Further locks lead the canal southwards under the former Roman Road Watling Street, now the A5, to Gailey Wharf. The tower-shaped building next to Gailey Top Lock was once the old lock keeper's cottage, and today houses a small gift shop. Continuing south, duck under pipe bridges past a chemical works. The canal wiggles along past the entrance to the former Hatherton Branch until the route straightens out just beyond the M54 motorway.

The very narrow rock cutting called Pendeford Rockin' will keep anyone at the tiller alert - if you meet a boat, you’ll need to use one of the special passing places. Carry straight on at Autherley Junction, where the Shropshire Union Canal heads off to your right. At Aldersley Junction, turn off onto the Birmingham Main Line, part of the Birmingham Canal Navigations (BCN). You’re immediately thrust into the Wolverhampton Flight of 21 locks so your crew will need to be ready!

Leaving Wolverhampton, the canal heads south towards Coseley and the short Coseley Tunnel (360yds/329m long), its winding route the original route chosen by the canal engineer James Brindley. At Factory Junction, a short detour right towards the Dudley Tunnel offers the opportunity to tie up next to the 26-acre Black Country Living Museum for a special encounter with the region’s past. The region’s historic buildings were saved from demolition and rebuilt brick by brick at the museum site creating an urban canalside village, where staff dress in costume, craftsmen demonstrate Black Country skills and heritage boats are moored. You could also take a boat trip run by the Dudley Canal & Tunnel Trust into the Dudley Tunnels network of limestone caverns. The ‘Dudley Tunnel’ was begun in 1775. It took 9 million bricks to line the tunnel and, almost unbelievably, each brick was handmade by women and children. A labyrinth of caverns and branches connect with the main tunnel and are separated on three levels, by only ten precarious feet of rock and history. When you’ve finished exploring, your route takes the Birmingham Level via Factory Locks for Thomas Telford’s straight route via Galton Bridge and Galton Tunnel (122yds/112m long), back into Birmingham.

Complete your cruise by retracing your route through Gas Street Basin to the Worcester & Birmingham Canal and south back to Alvechurch. 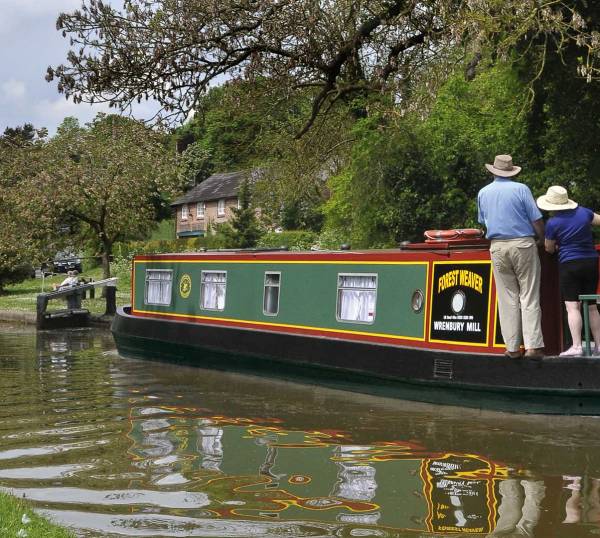 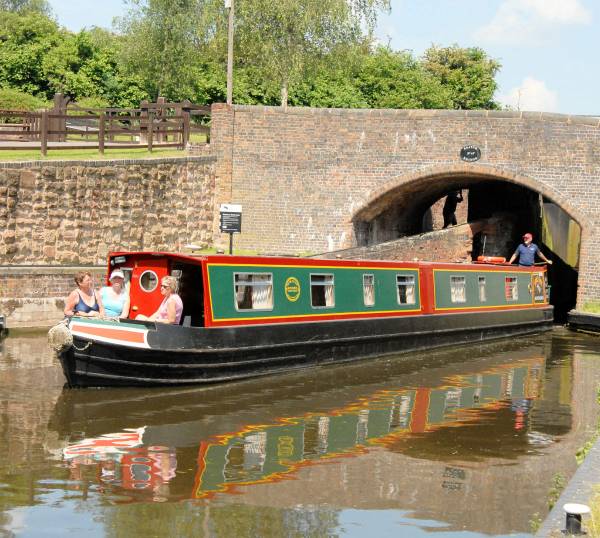