Your route will lead you through the disputed territory of two rival canals, the Grand Union and the Oxford, and will meander lazily along a contour-hugging canal. You’ll hear of rivalries and wars, nursery rhymes, brickwork and heritage boats, ending in a world-famous city of learning.

Setting off from Gayton Marina, your route heads past Gayton Junction along the Grand Union Canal. The Grand Union’s Northampton Arm descends a 17-lock flight into the heart of Northampton so, if time allows, turn right at the junction to explore the town. Northampton is renowned for its shoe making, dating back to medieval times. Northampton Museum and Art Gallery has the largest collection of historical footwear in the world, with over 12,000 pairs. After the successful fulfilment of a shoe and boot order for the army in the 1600s, the town received frequent bulk orders for army boots from the English Civil War onwards. Demand became so strong that by 1841, there were reputedly over 1,800 shoe makers working in the town, mostly from home workshops. Industrialisation later cemented this reputation and the amount of shoe factories increased. Today over 25 shoe manufacturers create crafted shoes here with customers including HRH Queen Elizabeth II. Even the town’s football team is called ‘The Cobblers’.

As you follow your route northwest, skirting round the villages which dot the landscape, the canal’s activity is centred on boatyards and pubs. The railway runs alongside the canal and, just north of Weedon and its two aqueducts, canal and railway are joined by the busy A5 on the old Roman road of Watling Street, and the infamous M1. The four transport routes run parallel as the canal climbs the seven Buckby Locks before reaching Norton Junction where you turn west before diving into the hillside for Braunston Tunnel (2,042yds / 1,867m long).

After descending Braunston’s locks, this idyllic canal village, a settlement steeped in history dating back to the Doomsday Book, begs exploration with its Horseley iron bridges and historic canalside workshops. The now sleepy junction between the Grand Union and Oxford Canals was once one of the busiest commercial trading points linking with London. Canal engineer James Brindley built the Oxford Canal in his typical winding fashion, flowing around contours rather than bulldozing a straight course. When the much straighter Grand Union Canal was built, it stole much of the Oxford’s commercial traffic - but the Oxford fought back by charging extortionate tolls to use its water in the London to Birmingham link between Napton and Braunston. Today its importance has not diminished as it has become a much-loved hotspot for canal leisure seekers and the marina hosts the annual Braunston Historic Boat Rally. 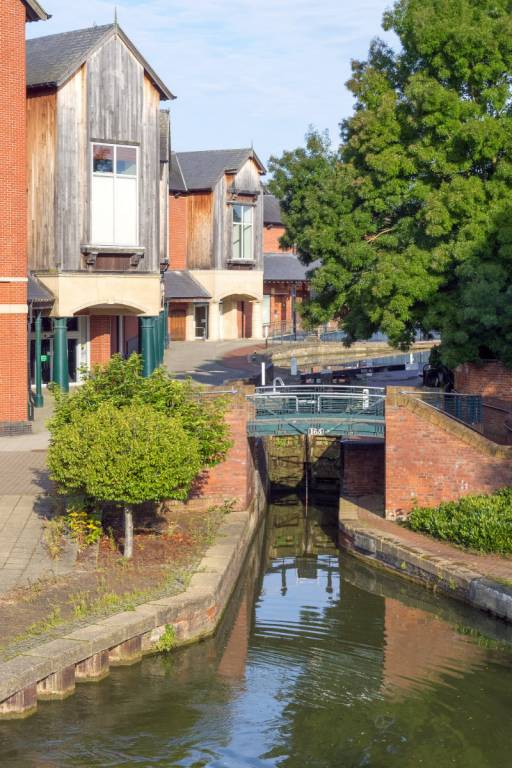 At Napton Junction, the Grand Union continues north to Birmingham while you now follow the Oxford Canal southwards. The Oxford Canal was one of the first canals built in Britain and is one of the most rural. There is a prevalence of wooden black and white lift bridges, used by farmers to access their land. Napton on the Hill is well-known for its windmill, which dominates the landscape and would have been a useful landmark for traditional boatmen in the commercial carrying days of the canal. The village has had a windmill since 1543, though the current Grade II-listed windmill dates from the 18th century. Many villagers were employed in the local brick and tile works, and the symbol of a windmill was stamped into the bricks and tiles before being transported away on canal boats.

Napton Flight’s nine locks carry the canal up to the summit level in glorious surroundings. The traditional lock hovel by lock 10 is no bigger than a garden shed, yet even has a chimney for the canal workman’s fire! Several pillboxes remind that this stretch of the Oxford Canal was an important part of the Oxford and Grand Union Canals Stop Line designed to defend the industrial Midlands in the event of an invasion by German troops during World War II.

The canal swirls through open country for almost ten miles before the five Claydon Locks drop the canal down towards Cropredy. Mostly a peaceful oasis, the village bursts at the seams in August when hoards turn up for the annual music festival which began as a reunion event after Fairport Convention held their ‘farewell’ concert here in 1979.

Just south of Cropredy, the railway and M40 noisily encroach on the canal as it makes its way into Banbury. Sung by countless generations of children, the cross of the nursery rhyme was destroyed in the 1600s as Banbury was said to be ‘too far gone in Puritanism’. The cross which now lies at the junction of four major roads was built in 1859 to celebrate the marriage of Queen Victoria’s eldest daughter. Near the cross is a large bronze statue, unveiled by Princess Anne in 2005, which depicts the ‘Fyne Lady’ upon a ‘White Horse’ of the nursery rhyme.

Tooley’s Boatyard in Banbury is the oldest dry dock in Britain. A Scheduled Ancient Monument, it has been in continuous use since 1790 regardless of changes to its surroundings. The boatyard once built and repaired wooden horse-drawn narrowboats, and having served the canals continuously for over 200 years has become a visitor attraction within Banbury’s shopping development. The boatyard is also renowned for its connection with Tom Rolt who founded the Inland Waterways Association (IWA) during the 1940s ‘war’ to help keep canals open. Rolt’s narrowboat ‘Cressy’ was docked here before it set off on its legendary voyage around the canal networks. Rolt’s book ‘Narrow Boat’ recorded Cressy’s journey and the publication had an impact that helped give a voice to the canals in an era of decline.

South of Banbury, the M40 interrupts the quiet a couple of times as the canal meanders through open countryside studded with wooden lift bridges. There’s a flurry of activity at Lower Heyford with its busy boatyard and tearoom opposite the railway station, then the canal winds onwards through increasingly tree-lined surroundings. The River Cherwell has shadowed the canal for most of the way from Banbury and just south of bridge 215, river and canal merge before separating again at Shipton Weir Lock.

The canal village of Thrupp attracts boaters and walkers, drawn to its opulent greenery in an unspoilt waterways landscape, and of course its pubs and teashop. Skirting the edge of Kirtlington, the canal now makes its way to the city. Oxford, world famous for its university founded here as early as the 13th century, is a vibrant exciting place to visit. The ‘City of dreaming spires’ is a seat of learning with its historic colleges - one of the earliest, Merton College, was founded in 1264 and provided a ‘blueprint’ for many later scholarly colleges in both Oxford and Cambridge. Also world renowned for the Bodleian Library with its collection of rare books and manuscripts and the Ashmolean Museum which is the oldest public museum in Britain… and perhaps in the UK for a certain television detective. The River Thames is an important feature of the city and the canal is connected to it via Isis Lock at its most southern point, and higher up via the short Duke’s Cut.

Once you’ve had your fill of dreaming, it’s time to retrace your route back to Gayton Marina, enjoying this relaxing journey from a new perspective.