The Warwickshire Ring from Gayton Marina

A route mixing rural and urban which takes in parts of the Grand Union Main Line, the Oxford Canal, the Coventry Canal, the Birmingham & Fazeley Canal and the Stratford Canal. This route from Gayton includes six tunnels, several aqueducts, and 145 locks - can be done in 14 nights.

A journey of junctions and lock flights, this energetic route meanders through secret countryside, industrial heritage and into the canal capital of Birmingham. With aqueducts, lock flights, staircases and tunnels to navigate, the Warwickshire Ring is a great challenge to test any helmsman's skills.

The route can also be completed from Alvechurch and Rugby.

From the marina head past Gayton Junction to follow the Grand Union Canal as it meanders north through open farmland. The canal mainly skirts the villages dotting the landscape, and activity is centred on boatyards and pubs which create occasional diversions from the calm.

The railway runs alongside the canal for much of the way, and just north of Weedon and its two aqueducts, canal and railway are joined by the busy A5 (the old Roman road of Watling Street), and the infamous M1. A brief encounter with the noise of the M1 is ironically thrilling from the peaceful canal, and four transport routes run parallel as the canal climbs the seven Buckby Locks before reaching Norton Junction. Turn left to head west through a magnificent hawthorn-flanked canalscape, diving briefly into the hill for Braunston Tunnel (2,042yds/1,867m long).

After working down Braunston’s lock flight, take time to explore the idyllic canal village of Braunston, a settlement steeped in history dating back to the Doomsday Book, with its Horseley iron bridges and historic canalside workshops. The canal leads to the sleepy junction between the Grand Union and Oxford Canals, once one of the busiest commercial trading points linking with London. Canal engineer James Brindley built the Oxford Canal in his typical winding fashion, flowing around contours rather than bulldozing a straight course. When the much straighter Grand Union Canal was built, it stole much of the Oxford Canal’s commercial traffic - but the Oxford Canal fought back by charging extortionate tolls to use its water in the London to Birmingham link between Braunston and Napton. Today its importance has not diminished as it has become a much-loved hotspot for canal leisure seekers and the marina hosts the famous Braunston Historic Boat Rally every year too. All Saints’ Church is known as the ‘Cathedral of the canals’, having overseen the christenings, marriages and burials of generations of boaters. 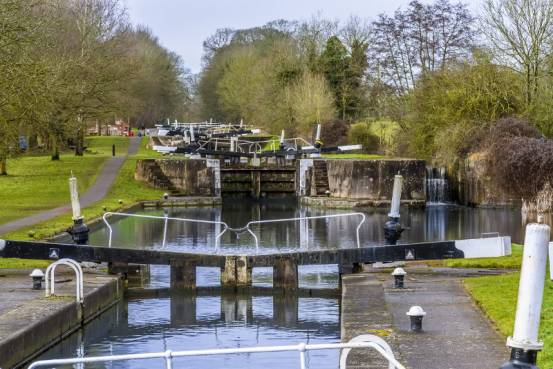 Past the double Horsley iron bridges at Braunston Turn, head north along the Oxford Canal. It’s an easy few miles until the distinctive paired Hillmorton Locks challenge your crew. These locks are in pairs, originally doubled up to allow more traffic through this busy stretch  of canal, and the gates of locks 4 and 5 had special canal poetry carved into them as part of the celebrations when British Waterways became the Canal & River Trust in 2012. Just beyond Hillmorton, Rugby is world famous for its connection with rugby and any fans will be compelled to explore the town itself. The Webb Ellis Rugby Football Museum tells the story of how one schoolboy changed the course of sporting history.

After the short Newbold Tunnel (250yds/229m long), the canal trundles through open countryside. Brinklow is a short walk south of Stretton Stop and has the remains of a medieval castle built to defend the Fosse Way which crosses the canal here. It’s now a gentle (though intruded for a while by the M6 and M69 motorways) lock-free journey as the canal skirts most villages before the Oxford Canal ends where it meets the Coventry Canal at Hawkesbury Junction, a busy place filled with boats and a photogenic former engine house.

If your timings allow, it may be worth a detour along the short canal arm into Coventry. The ruins of the original cathedral are a stark voice on the skyline of Coventry's own 'ground zero' left from the horror of World War II. In the 1960s a light of hope was built in the new cathedral. A bond between these two buildings that lean side by side is a powerful and emotional paradox.

Heading north from Hawkesbury, the canal skirts Bedford, and passes Marston Junction where the Ashby Canalheads off to the east. After the suburbs of Nuneaton, the canal passes a series of nature reserves and landscape formed from the spoil heaps of former quarries, the most dramatic of which is known as Mount Judd. A burst of energy is needed for the 11 Atherstone Locks, then the canal winds gently through delicious English countryside.

Crossing over the beautiful Grade II-listed Tame Aqueduct, your route now takes you south from Fazeley Junctionalong the Birmingham & Fazeley Canal. Any children aboard may want a quick detour to Drayton Manor just south of the junction. The 11 Curdworth Locks take the canal uphill and then through the diminutive Curdworth Tunnel(57yds/52m long), where you meet the trailing outskirts of Birmingham. At Salford (or Spaghetti) Junction, turn left and climb into the heart of the city via a quick succession of locks, the 11 Aston Locks followed quickly by the 13 Farmer’s Bridge Locks. 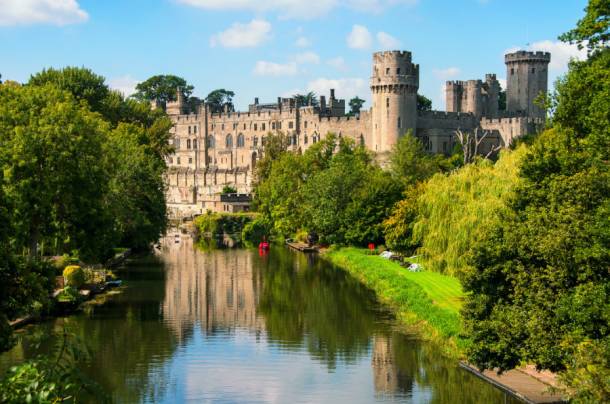 The bronze bull of the Bullring, the markets, Antony Gormley's sculpture, designer shopping, multi-cultural panache and a spectacular controversial library - that's Birmingham. Yet first impressions don't give away the city's biggest secret. It is at the heart of Britain's canal network and spaghettis more miles of water than Venice (over 100 navigable miles of it!).The historic waterside hub is alive with bars and restaurants and Symphony Hall, ICC, Arena and Brindleyplace spoil visitors with choice. Birmingham’s famous markets are only a short walk from the canal, and there are also art galleries, museums, theatres and dizzy opportunities for shopping too. Gas Street Basin gives a clue to its importance in its name, as it was the first area in Birmingham to be lit by new-fangled gaslights.

The Birmingham Canal Navigations (BCN) join the Worcester & Birmingham Canal at the ‘Worcester Bar’. The great spaghetti of canals that converge in Birmingham was once the beating heart of the Industrial Revolution. Cargoes of coal, glass, porcelain, chocolate crumb and the heavy trade of the Black Country were carried by canal boat to and from Birmingham. The big business of Britain’s canals was to link the nation to world markets and fierce commercial battles between the canal companies, the daily plight of boat crews sometimes petered into insignificance. Water was precious to competitive canal companies and, in a bid not to lose any of its canal water, the BCN insisted a solid bar was built to separate its canal from the Worcester & Birmingham Canal. The ‘Worcester Bar’ was built in 1792 and remained in place for 30 years, forcing canal workers to lift cargo over the bar to load and unload clumsily from boat to boat. In 1815, everyone huffed a sigh of relief when a cut was made and the Berlinesque bar was penetrated. The lock has gone, and boats roam freely today, but the bar is still visible to the informed tourist eye.

After a sharp right turn at the Mailbox (the former Royal Mail sorting office, now a mix of designer shopping, bars, television and radio studios), follow the Worcester & Birmingham Canal south through the short Edgbaston Tunnel(105yds/96m long) and the pretty residential area of Edgbaston, characterised by its white Georgian buildings. The canal skirts the edge of the Botanical Gardens then passes the campus of Birmingham University and the huge Queen Elizabeth Hospital as you reach Selly Oak.

A treat soon spikes your journey. Mr Cadbury built his chocolate factory and Bournville village for his workers on the canalside over 200 years ago. What chocoholic could resist stopping off to visit Cadbury World? It’s also worth a wander round Bournville with its quaint green surrounded by shops, overlooked by a statue of George Cadbury himself from the Quaker Meeting House.

At King’s Norton Junction, follow the Stratford Canal as it heads off east towards Stratford-upon-Avon. A swing bridge is swiftly followed by the short Brandwood Tunnel (352yds/322m long), and the canal now winds its way past the back gardens of Birmingham’s suburbs. There are a number of bridges and a short aqueduct before you reach Shirley Draw Bridge, next to a pub of the same name. The bridge is actually a lift bridge operated by using both a windlass and a key. The railway over the canal flags the end of the built-up area as you cruise gently through pretty countryside to Earlswood. A footpath from bridge 17 leads just half a mile to Earlswood Lakes. There are three separate lakes or reservoirs to supply water for the canal, built over nearly five years in the 1820s using labourers which included Napoleonic prisoners of war, now popular for walking, sailing and fishing.

The M42 encroaches on the peace and quiet before you start to descend some of the 26 locks of the Lapworth Flight, spread over nearly two miles. Halfway down the flight, Kingswood Junction, with moored boats, split bridges and white-washed cottages, connects the Stratford Canal to the Grand Union Canal via a short boat-filled branch line.

Turning south on the Grand Union, the canal winds through open countryside before cutting through Shrewley Tunnel(433yds/396m long) to the rather daunting 21 Hatton Locks. Nicknamed 'Stairway to Heaven', there’s a welcome teashop and pub at the top before you start your descent to Warwick. Warwick calls for exploration to the south of the canal - its most famous attraction being of course Warwick Castle, dramatically overlooking the River Avon. The canal skirts Leamington Spa, an elegant town with broad streets of Regency houses, where the Royal Pump Rooms offer the opportunity for a refined afternoon tea.

The canal climbs out of the Avon Valley, as the staircase locks at Bascote are quickly followed by the 10 Stockton Locks and three Calcutt Locks before arriving at Napton Junction. The appropriately named pretty village of Napton on the Hill is well-known for its windmill, which dominates the landscape and would have been a useful landmark for traditional boatmen in the commercial carrying days of the canal.

Heading east from the junction, the canal meanders lazily through quiet open country the few miles back to Braunston, where after navigating again through Braunston’s Locks and tunnel, you turn south again at Norton Junction onto the Grand Union Canal to retrace your steps back to Gayton Marina.