In a parallel world reflecting the evolution of transport, with unforgettable days full of tranquil drama and whimsy, your route will lead you under bridges, over aqueducts and through unusual canal cuttings. It will take you on a richly green tour that skims the distant outskirts of the urban Midlands before bursting into the tranquil haven of Shropshire countryside.

Head northwards out of the marina and follow the Coventry Canal to Fradley Junction where the canal ends just beyond a swing bridge as it meets the Trent & Mersey Canal. This is a hotspot for wildlife spotting with an award-winning nature reserve, and there’s a pub and teashops to tempt you to stay a while too. Head west along the Trent & Mersey Canal as it climbs past woodland.

There are no locks for almost nine miles beyond Wood End Lock, as the canal winds its way slowly through glorious countryside. King’s Bromley, a short walk north of bridge 54, has a cross in the churchyard known as Godiva’s Cross, as Lady Godiva, of Coventry fame, is said to have briefly lived here.

The canal comes close to the River Trent as it passes through Handsacre and Armitage (best known for Armitage Shanks bathrooms). Josiah Spode, of the pottery family made famous by Josiah Spode the Elder, used to be organist at the local church and in 1861 bought an organ for the church that was originally built in 1790 for Lichfield Cathedral. Josiah also gave the church a stained glass window in 1868 in memory of his wife. Watch out for oncoming boats as the canal narrows to one boat width where there was once a tunnel. The Hawkesyard Estate also has a Spode connection as they lived here in the 1800s when the Hall was known as Spode House.

Power station chimneys are clearly visible as you pass the fringes of Rugeley. The canal crosses the River Trent over an aqueduct and the river stays close for the next few miles. The huge expanse of Cannock Chase can be seen to the south. This Area of Outstanding Natural Beauty (AONB) covers 26 square miles and was once a Norman hunting ground. A herd of fallow deer are descended from generations of deer who grazed here.

Just below Haywood Lock is a popular mooring spot to explore one of the cruise’s highlights. Shugborough Hall, dating back to 1693 and now a National Trust property, peeps over the canal and calls you with panache you can't ignore. The estate was once ancestral home of the Earls of Lichfield, of which the 5th, Patrick Lichfield the photographer, was perhaps the most well-known.

At Great Haywood Junction, the Trent & Mersey Canal carries on northwards while you take a sharp turn under the arched bridge to follow the Staffordshire & Worcestershire Canal. The canal crosses the River Trent on a small aqueduct and then curves towards the twist in the tale of this canal. In the 18th century Clifford Thomas occupied Tixall Hall, and when canal builders first arrived to dig an ugly water-motorway of his era, he was unimpressed. To avoid spoiling the view from his window, he insisted the canal builders widened the water to disguise it as a lake. So as you pass through a short tree-lined stretch don't be surprised when the full drama of Tixall Wide bursts open. The meadow alongside is a Site of Special Scientific Interest and home to a variety of nesting birds. 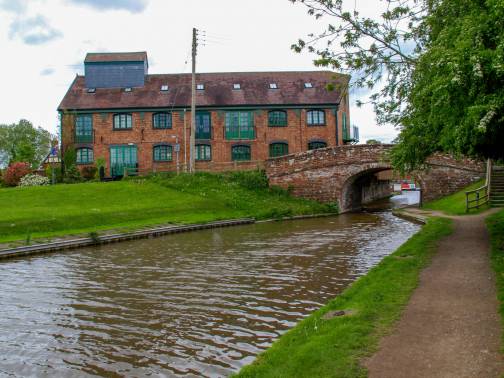 Tixall Lock near Milford is particularly attractive, with a pretty lock cottage and views towards the castellated entrance to Shugborough Railway Tunnel beyond. A four-mile stretch without locks follows the River Sow for much of the way, until just beyond bridge 106 where the canal crosses the river on the aqueduct built by James Brindley. Between bridges 98 and 99, you could hop on a bus along the A34, to visit the county town of Stafford.

The canal climbs through a series of locks to Penkridge, a little town with a locally renowned weekly market, and a history that spans coaching inns, racehorses, canals and railways. Further locks lead the canal southwards under the former Roman Road Watling Street, now the A5, to Gailey Wharf. The tower-shaped building next to Gailey Top Lock was once the old lock keeper's cottage, and today houses a small gift shop. Continuing southwards, duck under pipe bridges past a chemical works. The canal wiggles along past the entrance to the former Hatherton Branch until the route straightens out just beyond the M54 motorway, a clue to your proximity to the city of Wolverhampton.

Keep alert through the very narrow rock cutting called Pendeford Rockin' - if you meet a boat, you’ll need to use one of the special passing places. Another steering challenge as you turn sharply on to the Shropshire Union Canal at Autherley Junction, leaving a canal built by James Brindley to follow a canal built by Thomas Telford. Both engineers preferred to avoid locks, but Brindley's plans followed the land’s contours creating notoriously winding canals, whilst Telford's tactic was to storm a straight course with determination and a fearless will to take on whatever rock cuttings were necessary.

There’s a lock at the entrance to the Shroppie, then a relaxing 8-mile lock-free pound until Wheaton Aston. Heading northwards you meet the M54 again, but peace resumes swiftly and the countryside is blissfully uninterrupted with villages scattered occasionally. Just beyond the ancient village of Brewood, Stretton Aqueduct carries the canal over the old Roman Road, now the A5. The canal crunches through a wooded cutting before reaching Wheaton Aston Lock.

There are no locks now for 17 miles, but cuttings, embankments and the short Cowley Tunnel (81yds/74m long) at Gnosall spice the route and wide-stretching views make an uplifting journey. From water level, many of the bridges over the canal seem extraordinarily high since the canal cuttings created a dramatic landscape. In this tranquil cruise today there secretly lie the stories of not only Telford, but also the remarkable achievements of navvies in the 1800s who shifted tonnes of earth and cut through rock by hand without powered machinery. 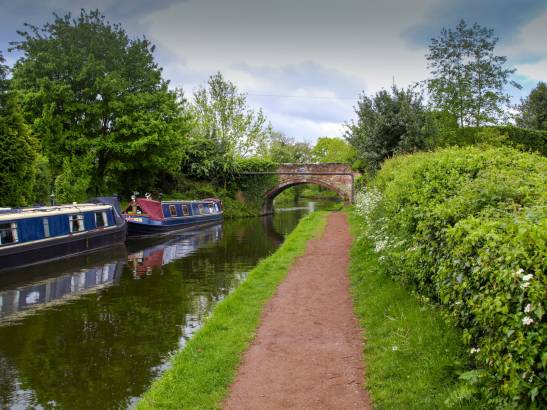 Loynton Moss is a floating bog and nature reserve that can be explored on foot from a footpath just north of bridge 39. You can expect to meet plenty of wildlife and a range of insects attracts breeding birds in summer.

Waterside pubs have served canals from the days of thirsty navvies to today's leisure boats, but few have remained as unspoilt by progress as the traditional Anchor at High Offley, sitting canalside at Anchor Bridge. Given the rural surroundings, and tranquillity of the water, it is ironic that the canal was built as a transport route to carry industry at the 4mph top speed of the canal era. Occasionally the canal hints at its original purpose and at the edge of Shebdon Embankment is the living site of the old chocolate factory that once sent goods to Bournville by narrowboat.

Just past bridge 59, there’s a winding hole at Tyrley Wharf before the five Tyrley Locks. At this point you can choose to turn and moor up in preparation for the return journey, or alternatively work through the locks and moor up to explore the town ahead. Market Drayton is a black and white timber-frame town with a noble claim as the home of gingerbread. So, after you've nibbled the last crumb of your gingerbread man, you’ll be ready to retrace your route back to the marina, enjoying the best sights again from a new perspective.