A varied route taking in the Coventry Canal, parts of the Oxford Canal, Grand Union Leicester Line, the River Soar, a short section of the River Trent and part of the Trent & Mersey Canal. This route includes five tunnels, several aqueducts, and 101 locks - can be done in 10 to 14 days depending on experience

The East Midlands or Leicester Ring is an idyllic rollercoaster sweeping through wide open views and some of the best-loved highlights of England's canals. With peaceful disregard for boundaries, the route meanders through four counties, Staffordshire, Warwickshire, Leicestershire and Derbyshire. This journey is rural and even remote at times, yet flings in and out of colourful hubs that tell gripping stories of canal-life to the passing traveller. And with rivers, aqueducts, lock staircase flights and 5 tunnels to navigate, this ring is a challenge to test the helmsman's skills.

Leaving the marina, it is advisable to head south along the Coventry Canal to travel the ring anti-clockwise in order to follow the current of the River Soar later in your journey. At Fazeley Junction, where the Birmingham & Fazeley Canal heads off towards Birmingham, any kids aboard may want a detour to Drayton Manor. Crossing over the beautiful Grade II-listed Tame Aqueduct, your route now winds past Tamworth then through delicious English countryside. A burst of energy is needed for the 11 Atherstone Locks then the canal passes a series of nature reserves and landscape formed from the spoil heaps of former quarries, the most dramatic of which is known as Mount Judd. 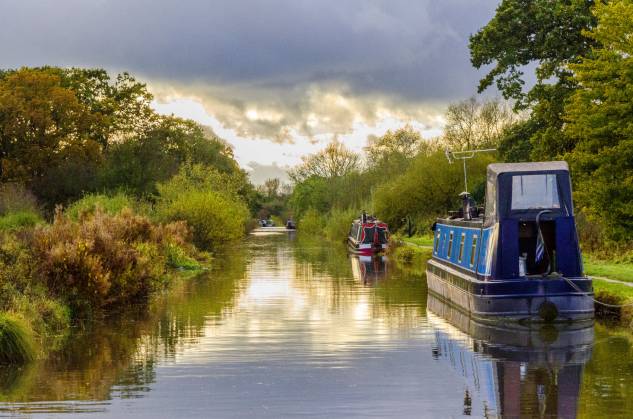 Skirting the edge of Nuneaton, you pass Marston Junction where, if time allows, the Ashby Canal heads off to the east. But just beyond Bedworth, at Hawkesbury Junction, a busy place filled with boats and a photogenic former engine house, another detour into Coventry may vie for your time too. The ruins of the original cathedral are a stark voice on the skyline of Coventry's own 'ground zero' left from the horror of World War II. In the 1960s a light of hope was built in the new cathedral. A bond between these two buildings that lean side by side is a powerful and emotional paradox.

The Oxford Canal heads southeast from Hawkesbury Junction to Brinklow, a short walk south of Stretton Stop with a 13th-century church and the remains of a medieval castle built to defend the Fosse Way which crosses the canal here. The short Newbold Tunnel (250yds/229m long) leads into Rugby, a place with a museum for a particular sport, then Hillmorton Locks remind your crew they still have a job to do.

Now follow the Grand Union Canal and its locks through Braunston, a much-loved hotspot for canal leisure seekers that was once one of Britain's busiest commercial trading points linking with London. Today the marina hosts the famous Braunston Historic Boat Rally one weekend every year. But at any time of year there’s plenty to explore here with its Horseley iron bridges, historic workshops, and a settlement steeped in history dating back to the Doomsday Book. After navigating Braunston Tunnel (2,042yds/1,867m long), the route turns northwards onto the Grand Union Canal - Leicester Section at Norton Junction. 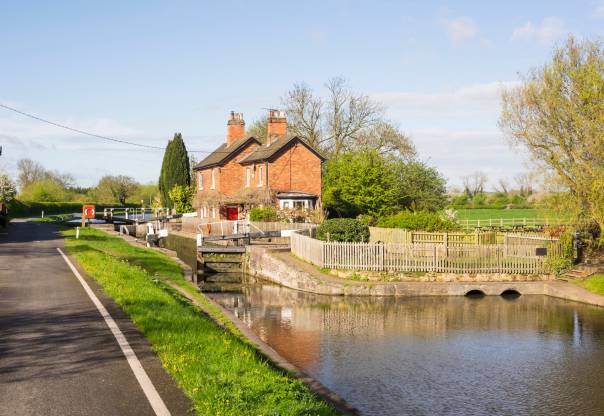 A brief encounter with the noise of the railway and the M1 is ironically thrilling from the peaceful canal. After scrambling through Watford Locks, four of which form a staircase, the canal drifts away again into tranquil rolling fields and onwards into the echoing silence of Crick Tunnel (1,528yds/1,397m long). The marina at Crick holds the annual Crick Boat Show every May, so if you collide with that weekend you can look forward to festival fun and traffic jams of bunting and gleaming boats.

Carrying on towards Foxton the sense of isolation increases, and only trees occasionally break the silence of the landscape. At Welford Junction, there’s the option to detour for 1½ miles along the Welford Arm to explore Welford and the reservoirs which supply the canal with water. There are no locks for around 20 miles, and open views are only temporarily blackened by Husbands Bosworth Tunnel (1,166yds/1,066m long).

Foxton is one of the highlights of your journey with a staircase flight of 10 locks scrambling 75ft downhill. In its heyday Foxton Locks served horse-pulled haulage boats laden with cargoes of sugar, tea, soap, tinned food, chemicals and paper. Look out for the old stables opposite the top lock, and allow time to visit the museum and explore the remains of Foxton Inclined Plane. The plane once lifted boats from the canal at the canal at the bottom of the hill, hauling them over dry land to the higher levels. This method of lifting boats up and down the hill took a fraction of the time of travelling through the locks, but after only 10 years in service the plane was deemed too expensive to maintain and was abandoned in 1911. Below the locks a short arm leads to Market Harborough, a historic market town that has attracted shoppers since the early 1200s.

Continuing north the canal wiggles across fields and through Saddington Tunnel (880 yds/805m long). Wildlife enthusiasts should look out for bats in the tunnel, and it is said there's also the chance of spotting Anna, the headless ghost! Just beyond Fleckney, the canal descends with the first of Kibworth Locks and views that soar across Wistow Park. The canalscape becomes more urban approaching the city. Leicester is one of England's oldest cities, once a settlement of Celts, and in AD50 it was a Roman city with the Fosse Way Roman Road helping launch the city's tradition as a trading centre. There are remains of the baths at the Jewry Wall and artefacts kept in the nearby museum. Leicester is also home to the National Space Centre, and has lots of shops, places to eat, sports and leisure facilities too.

The charismatic River Soar leads you away from Leicester in style, passing Loughborough where you may want to stop and admire the steam trains of the Great Central Railway. Trent Lock sits at the crossroads where the history of three rivers and four canals collide with pride. Wild flora, water birds and narrowboats pirouette into an idyllic landscape under the shockingly beautiful gaze of Ratcliffe Power Station. Cruise briefly west on the River Trent and through Sawley Cut, calm home of the large Sawley Marina and its boats, until you reach the Trent & Mersey Canal.

Derwent Mouth Lock ingeniously tames the river into a canal. This unassuming spot marks the start of a 93-mile canal that once carried the fortunes of Mr Wedgwood and his pots, and made Mr Brindley the most applauded canal engineer in the era of ‘canal mania’.  Travelling through Shardlow, history abounds as old warehouses stand with pride along the water's edge, reflecting the importance this historic inland port once held. Cargoes of the Industrial Revolution used to arrive on wide boats from the river and were unloaded into warehouses here before being reloaded onto narrowboats to be transported along the canal. There is a heritage centre and over 50 listed buildings in Shardlow.

The canal wanders onward with bridges, locks and aqueducts to keep you entertained until you reach Burton-on-Trent where a visit to a pub is mandatory to soak up the town's famous brewing heritage. And if you have time, visit the National Brewery Centre. At its height, Burton had over 30 breweries producing hundreds of thousands of barrels of ale each year.

The Trent & Mersey Canal carries on until Fradley Junction where it meets the Coventry Canal. This is a hotspot for wildlife spotting with an award-winning nature reserve, and there’s a pub and teashop to tempt you to stay a while too. When you can drag yourself away, follow the Coventry Canal the short distance back to the marina.