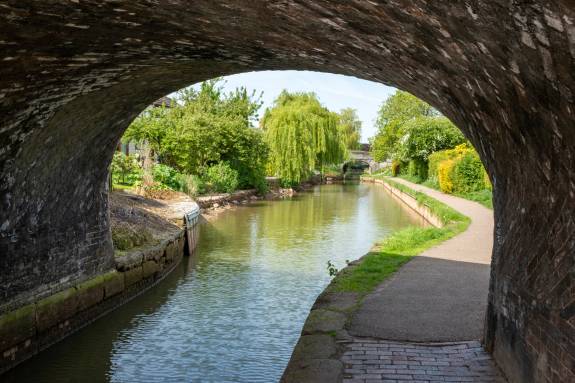 Your unforgettable route swings from lock-free relaxation to energetic lock flights, from rural to urban, and contrasts the winding and straight routes by two of the greatest canal engineers, James Brindley and Thomas Telford. This is a journey of junctions – Fradley, Great Haywood, Autherley, Aldersley, Factory, Salford, Fazeley – and cruises via uplifting landscapes, through engineering marvels, unravels some of the nation's grandest stories,  and gets to the heart of Birmingham city’s historic canal centre.

Follow the Coventry Canal a short distance north from the marina to Fradley Junction where the canal ends as it meets the Trent & Mersey Canal. This is a bustling hotspot with pub, teashops and an award-winning nature reserve. Head west along the Trent & Mersey Canal as it climbs past woodland and winds its way slowly through glorious countryside, with a lock-free nine miles after Wood End Lock. The River Trent comes close as the canal passes through Handsacre and Armitage, best known for Armitage Shanks bathrooms but also with links to the pottery family made famous by Josiah Spode the Elder. Just outside Armitage, watch out for oncoming boats as the canal narrows to one boat width where there was once a tunnel.

The chimneys of Rugeley’s power station can be seen as you pass the town, then the canal crosses the River Trent over an aqueduct and the river stays close for the next few miles. The huge expanse of Cannock Chase can be seen to the south. This Area of Outstanding Natural Beauty (AONB) covers 26 square miles and was once a Norman hunting ground. A herd of fallow deer are descended from generations of deer who grazed here.

Passing through Colwich Lock, one of this journey’s highlights, Shugborough Hall peeps over the canal and calls you to visit. The estate, dating back to 1693 and now a National Trust property, was once the ancestral home of the Earls of Lichfield of which the 5th Earl, Patrick Lichfield the photographer, was perhaps the most well-known. Above Haywood Lock, Great Haywood Junction is where the Staffordshire & Worcestershire Canal starts under the historic bridge to your left, while the Trent & Mersey Canal carries on northwards, studded with red brick bridges.

Once you reach the canal town of Stone, the excitement of a canal that was born for pottery begins to build. Your next stop is the bottle-oven landscape of the region celebrated famously across the globe as 'The Potteries'. In the 1700s, when Josiah Wedgwood was creating his innovative pottery designs, much of his work was smashed or stolen on its clumsy packhorse route to market. To reach mass markets across the globe he needed canals to be built. With entrepreneurial vision he employed the great canal engineer James Brindley to build the Trent & Mersey Canal. And by 1777, his delicate pots could set off in a canal boat to safely, and swiftly, reach faraway places across the world. The Potteries exploded into mass production, and any boat cruising the Four Counties Ring today has to allow as much time as possible to explore the living heritage in Stoke-on-Trent. As well as the World of Wedgwood, there's the Etruria Industrial Museum & Heritage Centre and the area is buzzing with contemporary potteries such as Emma Bridgewater's too.

The Caldon Canal slips quietly away eastwards from Etruria Junction, and if you have time, this detour is a gem for nature and heritage. Continuing north along the Trent & Mersey Canal and putting thoughts of potter's clay behind, your route leads into new territory where the intrigue is the sudden change in the colour of the canal water. Not unlike tomato soup, the rusty hue of the water is blamed on seepage of iron ore from the first tunnel at Harecastle engineered by Brindley in 1777. The second tunnel, sitting aside Brindley's, was built by Telford in 1827 and this is the route boaters use today. Cruising through Harecastle Tunnel (2,926yds/2,675m long) is a marmite experience! Love it or hate it, it's an echoing adventure through almost 8000ft of dripping darkness! And to add to the excitement, or misery, it is said that the ghost of poor old Kit Crewbucket lurks somewhere within the tunnel. After being murdered, her headless corpse was dumped in the canal and 19th-century boatmen would prefer to make time-consuming detours rather than face their fears inside this haunted tunnel. Luckily there's always daylight at the other side and fresh thrills to pursue. Your crew will soon be preparing for the long scramble through ‘Heartbreak Hill’. The glorious views from the summit at Kidsgrove can heal any heart, but the hill lives up to its name with the workout required to wind through this heavy series of locks.

As the canal descends to the Cheshire Plains you arrive at Middlewich. The Romans who arrived at this spot long before you, discovered salt and called the town Salinea. Then when canals were built, boats carried the salt industry into a new era. If you have extra time, you can detour northwards from Middlewich to see the Anderton Boat Lift, one of the 7 Wonders of the Canals. If not, turn left and through Wardle Lock onto the Middlewich Branch of the Shropshire Union Canal which travels to Barbridge Junction. Here you may be tempted to detour right along the canal to Chester if there is time in the itinerary. 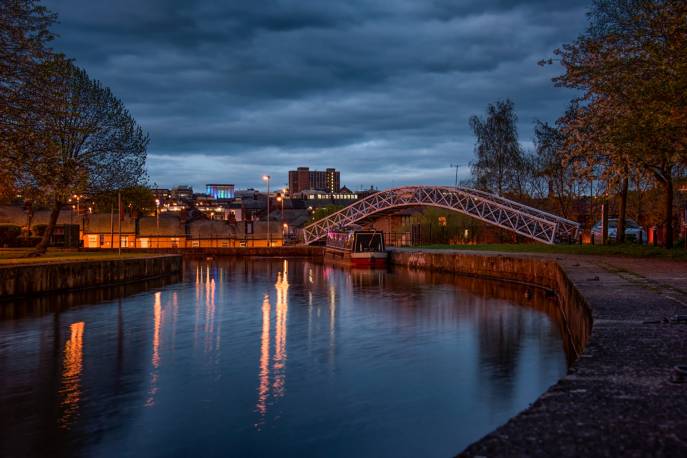 Turn left from Barbridge Junction onto the Shropshire Union Canal, heading southwards past Hurleston Junction where the Llangollen Canal heads west to Llangollen. Welsh hills sing in the distance inviting you to detour westwards and if you have extra time, the canal that leaps over the border into Wales is a rewarding distraction.

The canal soon crosses the stunning Grade II*-listed cast-iron aqueduct, designed by Thomas Telford in 1826, just outside Nantwich, a historic market town. Nantwich was first established in Roman times, but was mostly rebuilt after a brewer accidentally started the ‘great fire of Nantwich’ in 1583, which destroyed over 150 buildings. Such was the uproar that Queen Elizabeth I and her privy council ordered a national fundraising appeal and even donated £1,000 herself (approximately £150,000 today) to help rebuild the town, resulting in the many beautiful black and white beamed Elizabethan buildings throughout the town. The Queen’s generosity is marked by a plaque on a building now called ‘Queen’s Aid House’ in Nantwich Square.

The sweeping countryside beyond carries you to the 15 locks through the award-winning village of Audlem, where there’s a fascinating canal shop and craft hub housed in the former canalside mill. And above Adderley’s five locks, the town of Market Drayton offers a chance to explore its black and white timber frame architecture and decide if you accept the town's noble claim to be the home of gingerbread. After you've nibbled the last crumb of your gingerbread man, you’ll be ready to cruise up the five Tyrley Locks.

Now the route puts its feet up for a while with a 17-mile lock-free stretch as far as Wheaton Aston. Occasionally the canal hints at its original purpose and at the edge of Shebdon Embankment is the living site of the old chocolate factory that once sent goods to Bournville by narrowboat. Cuttings, embankments and the short Cowley Tunnel (81yds/74m long) spice the route and wide-stretching views make a fresh and uplifting journey. From the water level, many of the bridges over the canal seem extraordinarily high since the canal cuttings created a dramatic landscape. The countryside remains blissfully uninterrupted, with villages scattered here and there for interest. Just north of the ancient village of Brewood, Stretton Aqueduct takes the canal over the old Roman Road, now the A5. Your lock-free eight-mile pound ends with the lock at Autherley Junction which marks the end of the Shropshire Union Canal where it meets the Staffordshire & Worcestershire Canal.

Head south along the Staffordshire & Worcestershire Canal and shortly afterwards at Aldersley Junction, turn left onto the Birmingham Main Line, part of the Birmingham Canal Navigations (BCN). You’re immediately thrust into the Wolverhampton Flight of 21 locks so your crew will need to be ready! Leaving Wolverhampton, the canal heads south towards Coseley and the short Coseley Tunnel (360yds/329m long), its winding route the original route chosen by the canal engineer James Brindley. 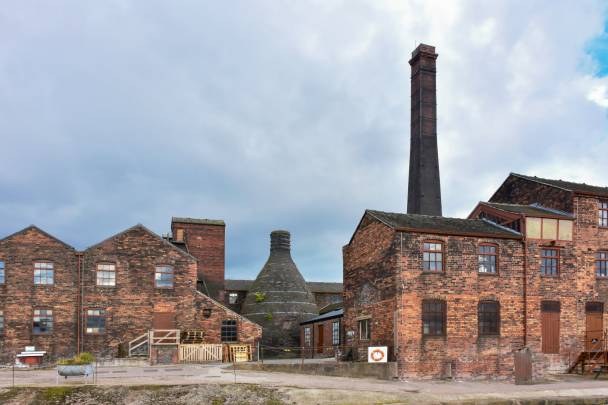 At Factory Junction, a short detour right towards the Dudley Tunnel offers the opportunity to tie up next to the 26-acre Black Country Living Museum for a special encounter with the region’s past. The region’s historic buildings were saved from demolition and rebuilt brick by brick at the museum site creating an urban canalside village, where staff dress in costume, craftsmen demonstrate Black Country skills and heritage boats are moored. If time allows, you could take a boat trip run by the Dudley Canal & Tunnel Trust into the Dudley Tunnels and network of limestone caverns. The ‘Dudley Tunnel’ was begun in 1775. It took 9 million bricks to line the tunnel and, almost unbelievably, each brick was handmade by women and children. A labyrinth of caverns and branches connect with the main tunnel and are separated on three levels, by only ten precarious feet of rock and history.

When you’ve finished exploring, your route then takes the Birmingham Level via Factory Locks for Telford’s straight route via Galton Bridge and Galton Tunnel  (122yds/112m long), into the heart of Birmingham. Boats cruise into Birmingham through the backdoor of the city, yet arrive at its thriving heart. The bronze bull of the Bullring, the markets, Antony Gormley's sculpture, designer shopping, multi-cultural panache and a spectacular controversial library - that's Birmingham. Yet first impressions don't give away the city's biggest secret. It is at the heart of Britain's canal network and spaghettis more miles of water than Venice (over 100 navigable miles of it!).The historic waterside hub is alive with bars and restaurants. Symphony Hall, ICC, Barclaycard Arena and Brindleyplace spoil visitors with choice and beg you to stay as long as you can. Birmingham’s famous markets are only a short walk from the canal, and there are also art galleries, museums, theatres and dizzy opportunities for shopping too.

After taking time to explore, you now leave the city along the Birmingham & Fazeley Canal via a quick succession of locks - the 13 Farmer’s Bridge Locks followed quickly by the 11 Aston Locks, taking you down to Salford (or Spaghetti) Junction and a right turn past the city’s trailing outskirts. Back in the countryside and through the diminutive Curdworth Tunnel (57yds/52m long), the 11 Curdworth Locks alongside the M42 take the canal down to Fazeley.

At Bodymoor Heath, Kingsbury Water Park lies to the right of the canal. The park was created from industrial gravel and sand extraction pits, and the resulting 600-acre park has around 30 pools and lakes. A Visitor Centre sets out the history of the park, and as many as 230 different species of bird have been spotted here so a must for any twitchers on board. And you may want to moor up near Drayton Manor Swing Bridge for children aboard who want a quick detour to Drayton Manor Family Theme Park.

There is no mooring allowed by the wooded hillside at Hopwas as this is the Whittington Firing Ranges (look out for the danger flags!) A stone by bridge 78 at Whittington marks where the Birmingham & Fazeley Canal changes to the Coventry Canal, and just beyond Huddlesford Junction (the Lichfield Canal) you arrive back at the marina.