An unforgettable journey that flings feisty heritage together with euphoric Severn views and skies full of birds, treating the traveller to a rare sense of wind-swept freedom.  The Gloucester & Sharpness may lack the narrow, winding, quaint charms of some canals, but it makes up for it by the straightforward charisma of a waterscape riddled with history.

Just south of joining the river you reach Diglis Locks, a pair of manned river locks with an ‘island’ between them – just follow the instructions of the traffic lights. Passing the site of the 1651 Battle of Worcester on your right, and cruising under the busy A38, the river now starts to wind its way past woods and ‘cliffs’ of distinctive red soil. The leafy River Severn makes boating feel an undistracted affair, the chaos of the ‘real’ world blissfully out of sight apart from the odd village or campsite to disrupt until you reach Upton upon Severn.

Busy moorings sit in front of the many pubs and cafes on its attractive waterfront, as this historic small town is a very popular stop-off. The town has become famous for the series of festivals during the summer which fill every space – most notably the Upton Jazz Festival attracts performers from across the world. There are also independent shops and a heritage centre in ‘The Pepperpot’ to explore.

The river approaches and flows under the M50, so noise intrudes on your peace for a while but calm is soon restored. The Grade II*-listed cast-iron single-arch Mythe Bridge, built by the great engineer Thomas Telford in 1826 (he liked it so much that he wrote “I reckon this the most handsomest bridge which has been built under my direction”), announces your arrival at Tewkesbury. As the River Severn skirts the town, you will need to either moor up against the high bank on your right, or turn left onto the River Avon and go through Avon Lock to moor above the lock. The market town of Tewkesbury is packed with half-timbered buildings dating from the Tudors, independent shops, inviting cafés and cosy pubs. Its crowning glory is the beautiful 12th century Abbey, with the highest Norman tower in England.

The river is semi-tidal below Upper Lode Lock, so the lock keeper will let you know any particular information you need for your journey. As you reach Lower Lode and its hotel, it’s worth taking a look back towards Tewkesbury to see the glorious view of the Abbey with Bredon Hill behind it. Further south, the 19th-century Haw Bridge had to be replaced in the 1960s after a tanker barge collided with it.

At Upper Parting the river separates– you continue straight on while the main part of the river heads right. The infamous Severn Bore is a phenomenon that is best seen down the river towards Minsterworth. The Severn Estuary narrows from 5 miles wide at Avonmouth, to 1 mile wide at Sharpness to just 100 yards at Minsterworth. A tidal surge heads upriver, trapped by the high banks and creates such a wave that you can even see surfers take to their boards on it!

It is important to follow the navigation instructions you’ve been given and phone ahead to Gloucester, as the channel now narrows and you will need to look out for boats heading upstream. A series of sharp, blind bends and three bridges mark your final approach to the manned Gloucester Lock, rising into Gloucester Docks and the Gloucester & Sharpness Canal.

Since Roman times, Gloucester had been an important port, but sea-faring vessels venturing inland too often met their end with the unpredictable sands and tides of the Severn. Under the guidance of the great engineer Thomas Telford, the Gloucester & Sharpness Canal was built as a bypass from the treacherous waters of the river Severn from Sharpness to Gloucester. When it opened in 1827, it was the world’s broadest, deepest canal. With the canal's help, Gloucester became Britain's most inland port and cargoes from around the globe arrived by sailing ship, barge, narrowboat, tanker and steamship. During the Industrial Revolution, the canal carried grains imported to feed the hungry towns of the Midlands. The canal also played an important role in the economy of the Midlands carrying coal from Forest of Dean.

Trade was at its peak with the arrival of the canal and the newly built docks at Gloucester handled exports and imports from around the world, with grain and timber as the bulk. Huge warehouses were built to store cargo, some of which have survived and are protected in their full glory today. History clings in dockside ropes and rusty mooring rings, in preserved rail tracks and a steam crane, a former warehouse has become the National Waterways Museum Gloucester, and everywhere there are clues to the past. There are also plenty of opportunities for eating, drinking and of course shopping (at the Gloucester Quays shopping centre).

Gloucester’s city centre is dominated by its medieval cathedral, with the largest stained glass window in the UK. In 2016, Gloucester’s 1000-year-old cathedral became the oldest cathedral in the UK to have undergone a solar installation to cut its carbon emissions. Gloucester, Worcester and Hereford Cathedrals make up the ‘Three Counties’ and take turns to host the annual ‘Three Choirs’ Festival at the end of July, the longest running non-competitive classical music festival in the world!

Once you have explored the city and its dock area, it’s time to exit the docks beneath Llanthony Lift Bridge and continue your journey along the Gloucester & Sharpness Canal. Passing industrial buildings and the outskirts of Gloucester, the canal curves sharply right then left as it enters a cutting towards Rea Swing Bridge. The River Severn is very close here before it winds northwest away from the canal. Modern housing in Quedgeley marks the edge of the suburbs before the canal enters another cutting beyond the pub at Sellars Swing Bridge.

The canal now heads through open countryside for a couple of miles before reaching Saul Junction, with its marina, boatyard and busy moorings. The junction is where the Gloucester & Sharpness crosses the Stroudwater Canal, part of the Cotswold Canals restoration project. James Brindley, the pioneering canal engineer responsible for Britain’s early canals, wanted to build the first national transport route, the Grand Cross, linking the major rivers - Thames, Severn, Trent and Mersey. Brindley’s big dreams live on - the Cotswold Canals are under restoration. A visitor info centre run by the Cotswold Canals Trust explains the aim to eventually reopen a link from the River Severn, across the Gloucester & Sharpness Canal, to the Thames.

The pretty village of Frampton on Severn stretches between Fretherne and Splatt Bridges, and lays claim to the longest village green in the UK. Just above Fretherne Bridge, remnants of Cadbury’s factory can be seen on the opposite bank. Cocoa beans were carried inland by boat along the Gloucester & Sharpness Canal to Frampton on Severn. Milk was brought along the canal from local farms and the process of turning the cocoa beans into chocolate crumb began in the Cadbury’s factory at Frampton. The crumb then continued its journey to Bournville near Birmingham to be made into chocolate.

The canal is bursting with wildlife and birds making their way to WWT Slimbridge Wetland Centre, home of the Wildfowl & Wetlands Trust set up by Sir Peter Scott in 1946. Sandwiched between the banks of the River Severn and the Gloucester & Sharpness Canal at Patch Bridge, the Centre is home to the world’s largest collection of swans, geese and ducks and attracts vismigs (visible migration) of numerous species of birds. There are expansive views over the River Severn to the west, and marshland and fields to the east.

At Purton, on the banks of the river lie the Purton Hulks, a 'boat graveyard' recognized as one of the largest clusters of historic maritime boats in the world. The first boat was dumped at Purton in 1909 after a landslip between the river Severn and the canal near Purton caused the canal to empty its water. To slow further erosion, for over half a century retired vessels were towed to the banks of the river and beached. Years of tides have taken their toll on the beached wrecks, and the landscape has grown in and out of the bones of the boats. Tufts of grass sway in silence over still boat carcasses that stand like statues of soldiers in an empty battlefield, and an unmistakable spirit sweeps the landscape.

When the water is out, the huge expanse of sand looks like seaside, but the waters of the Severn move quickly over this flat area. Beyond the long low wall by the towpath, the views stretch for miles. The plaque by a round stone tower tells the story of the fate of the old Severn Railway Bridge. The bridge was built in the 1870s to carry coal from the Forest of Dean to Sharpness, but in 1960 two tankers, blinded by fog, collided with one of its piers. The bridge was later demolished and the remains of the columns and the unfortunate tankers can be spotted on the river bed at low tide. The Rapunzelesque tower once housed the steam engine which created power to open the swing bridge. Swing bridges are a feature of this canal as they allowed the passage of ships with tall sails.

Along Sharpness Old Arm, the old Dock Master’s house, now the Sharpness Rescue Station, stands with the basin and moored boats on one side and the river Severn below and beyond. It is probably best to moor in the Arm or turn and moor alongside the towpath to explore Sharpness Docks on foot. Sharpness Docks also marks the start of the Severn Way long-distance trail. The canal rolls into the estuary at a huge lock with the Severn Estuary spread out beyond. Still busy with commercial boats, there is much evidence of its busy past with old tram rails hidden in the grass, chunky chains coiled and rusting.

After soaking in the Turneresque skyline with flat sand swirling in a wash of water and the Severn Bridge faintly in the distance, it’s time to enjoy this fascinating route again back to Worcester. 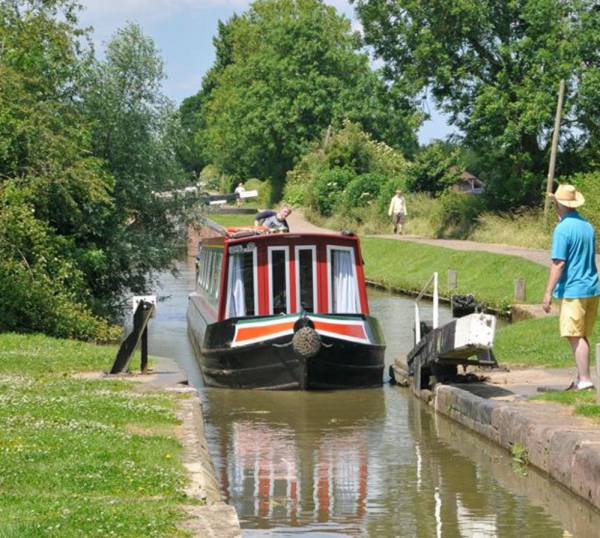