From historic Worcester, this route travels scenic canal-miles right into England's proudest Shakespearian territory.  With the bard snatching the tourist crowds, your cruise along the canal is a chance to soak up the best of both worlds, spot wildlife and enjoy the challenge of two of the country’s longest lock flights.

Before setting off from Worcester, it’s worth taking time to explore the city centre. The city is world-renowned for its porcelain factory, Royal Worcester, and for its glorious cathedral which overlooks the River Severn below. Worcester, Gloucester and Hereford Cathedrals make up the ‘Three Counties’ and take turns to host the annual ‘Three Choirs’ Festival at the end of July, the longest running non-competitive classical music festival in the world! In its industrial heyday, the Worcester & Birmingham Canal carried cargoes of porcelain from the world-famous factory here. Visit the Museum of Royal Worcester, or go sightseeing in the city centre and see its magnificent cathedral which dates from 1074 and overlooks the River Severn. And of course, there’s always shopping and lots of places to eat.

Head northwards on the Worcester & Birmingham Canal ascending a series of locks through the city’s outskirts. As you reach the countryside, there’s a final burst for the six Offerton Locks, then the canal dives under the M5 then arrives in the pretty village of Tibberton, where there are good visitor moorings and a welcome canalside pub.

Beyond Tibberton, the railway is dramatically close, running alongside the canal as it snakes past the pretty church and farm at Oddingley then through Dunhampstead, with its short tunnel (230yds/210m long), before canal and railway part company again. The lazy approach to Hanbury Wharf is lined with reeds and full of the characteristic bridges of the Worcester & Birmingham Canal. At Hanbury Wharf, the canal goes under the old Salt Way and the recently restored Droitwich Canal (reopened in 2011) heads off west to Droitwich.

Continuing north through glorious Worcestershire countryside, the lock-free section ends with the six Astwood Locks. Just beyond Stoke Works, at Stoke Prior, the six Stoke Locks lead up to the well-placed Queen’s Head pub, with a chance for a breather before the main event. The Tardebigge Lock Flight launches into staggering descent of 220ft in just over 2 miles. It’s the longest lock flight in Britain, with the exhilarating challenge of 30 locks, including a mighty 11ft top lock for you to remember travelling through! A plaque just above Tardebigge Top Lock commemorates the famous meeting between Tom Rolt and Robert Aickman which took place aboard narrowboat Cressy. Rolt and Aickman were the passion and brains behind the founding of the IWA (Inland Waterways Association) in 1946, with the aim of helping to keep Britain’s canal networks navigable.

Continuing through Tardebigge Tunnel (580yds/530m long) then Shortwood Tunnel (613yds/560m long), you arrive at the pretty village of Alvechurch. It is worth exploring the village, just a short walk down the hill from the canal, a charismatic place to linger. Once you’re ready to leave, follow the canal northwards past the village’s back gardens. As you leave Alvechurch, the canal turns sharply under the noisy M42 then crosses the valley on a high embankment past Lower Bittell Reservoir. There are two reservoirs at Bittell, both of which were built by the canal company, the larger of the two being used to feed water down to the canal via the feeder next to the cottage at the far end of the embankment. They are now both idyllic spots for bird watching and angling, and the larger Upper Bittell Reservoir also has a sailing club. A footpath from bridge 66 leads the short distance to the upper reservoir.

After a short wooded cutting you arrive at Hopwood, with its well-placed pub, before leaving the lush Worcestershire countryside behind as you disappear into the immense Wast Hills Tunnel (2,726yds/2,493m long), one of the longest canal tunnels in the UK. The tunnel forms the boundary between Worcestershire and Warwickshire, so you emerge from the tunnel into a new county and the straggling outskirts of Birmingham at King’s Norton.

A short distance beyond the tunnel, turn right at King’s Norton Junction to take the Stratford-upon-Avon Canal as it heads off east towards Stratford-upon-Avon. Separate canal companies used stop locks at junctions in order to ensure that their water was safe from the other canal company, and the stop lock at King’s Norton was somewhat different to the traditional lock. The company built a guillotine lock and although this is no longer in use, boats now cruise beneath the mechanisms and two guillotine gates.

A swing bridge is swiftly followed by the short Brandwood Tunnel (352yds/322m long), and the canal now winds its way past the back gardens of Birmingham’s suburbs. There are a number of bridges and a short aqueduct before you reach Shirley Draw Bridge, next to a pub of the same name. The bridge is actually a lift bridge operated by using both a windlass and a key. The railway over the canal seems to mark the end of the built-up area as you wind gently through pretty countryside to Earlswood. Earlswood Motor Yacht Club is evident from the boats moored just beyond bridge 16, and a footpath from bridge 17 leads just half a mile to Earlswood Lakes. There are three separate lakes or reservoirs to supply water for the canal, built over nearly five years in the 1820s using labourers which included Napoleonic prisoners of war, now popular for walking, sailing and fishing.

The M42 encroaches on the peace and quiet for a while, and Hockley Heath is the first tiny village with a welcome pub, then the 26 locks of the Lapworth Flight spread over nearly two miles, with the first & last four straggling away from the main flight. Halfway down the flight, Kingswood Junction, with its moored boats, split bridges and white-washed cottages, connects the Stratford Canal to the Grand Union Canal via a short boat-filled branch line.

Stratford-upon-Avon Canal is famous for its split bridges. They were built in two halves with a tiny gap to allow ropes to pass through so that, in the days of horse-towed narrowboats, the boatman would not have to untie his horse from the boat as he walked along the towpath. The canal is also renowned for its barrel-roofed lock keepers’ cottages – there is one at the junction. The truth behind the quirk is purely practical: engineers building the Stratford Canal knew more about building bridges than houses, so when they had to build lock cottages for the lengthsmen, they adapted their skills, resulting in cottages with these curious barrel-shaped roofs.

The M40 crosses the canal just before Lapworth Bottom Lock though its noise can be heard for some time before and after. Peace soon returns though as the canal continues its way through a rural landscape of fields, trees and sheep. Next to Lock 31 is a traditional lengthsman’s cottage (now cared for by the Landmark Trust). A sculpture looking into the lock by Antony Gormley was placed here in May 2015 as part of LAND project. The Fleur de Lys pub opposite provides a welcome break, before reaching the first of the Stratford Canal’s three unusual aqueducts – Yarningale, Wootton Wawen and Edstone (also known as Bearley). The towpath is level with the base of the cast-iron canal trough so the walker’s eye is level with boats which appear perched in a bath tub. Yarningale is merely a few feet long, Wootton Wawen Aqueduct carries the canal over a main road, and Edstone Aqueduct, the longest, is suspended dramatically over road, railway and river below. All are Grade II*-listed, and Edstone holds a Transport Trust Heritage Plaque.

It is worth taking the time to moor up at Wootton Wawen and explore the timber-framed buildings of the village which is dominated by Wootton Hall and its parkland, before your surroundings become more isolated as you cross the magnificent Edstone Aqueduct.

The canal then passes through the outskirts of Wilmcote before descending towards Stratford via the 11 Wilmcote Locks. Mary Arden’s Farm is only a short diversion from bridge 59 if you need a Shakespearian fix before reaching the main event. William Shakespeare’s mother, Mary was born and lived in Wilmcote then married John Shakespeare and moved into Stratford where she died in 1608. The canal meets the River Avon in Bancroft Basin, where there are visitor moorings. Wander the beautiful timber-clad streets of the world-famous Stratford-upon-Avon, second most visited tourist destination in Britain after London. The Shakespeare Birthplace Trust looks after the heritage of William Shakespeare in Stratford-upon-Avon and promotes his legacy across the world. Visit Shakespeare’s birthplace, or his tomb in Holy Trinity Church, and perhaps take in a play at the Royal Shakespeare Theatre. Or just soak in the atmosphere around the river and its many boats. When you can drag yourself away, discover your route from a different perspective back to the base at Worcester. 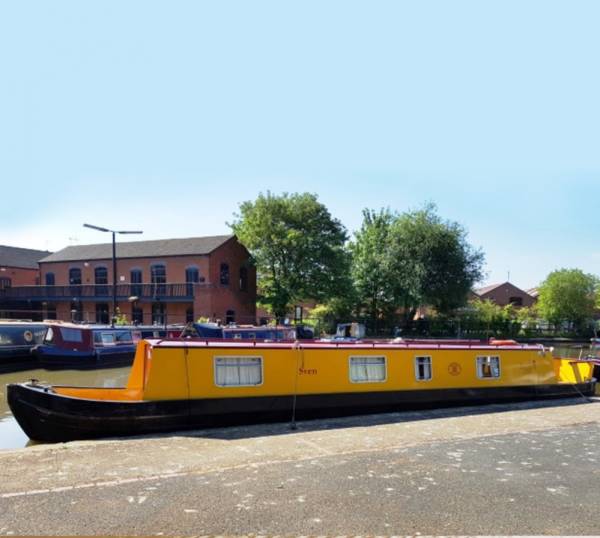