Things to do in Bath by canal

The City of Bath is a UNESCO world heritage site and is famous for it’s Roman Baths. Since the first century AD Bath’s been a top destination for holidaymakers. Relax in the hot springs, explore the city’s ancient history and Georgian architecture. In this guide, we’ll list our top picks of things to do in Bath by canal.

Take in the water

With over 2,000 years of history the Roman Baths are a must when in Bath. Walk in the footsteps of the Romans, see the ruins of the Temple of Minerva and other archaeological wonders. You can also drink the natural spring water and taste the minerals present.

There are events scheduled throughout the year for both families and history enthusiasts alike. The Roman Baths are located minutes away from the Kennet & Avon Canal and is just around the corner from Bath Abbey.

While you cannot bathe in the Roman Baths, you can still take in natural hot spring water in modern facilities at the Thermae Bath Spa. The Thermae Spa is a remarkable blend of old and new.

The relaxing facilities include a historic bath house, a multi sensory wellness suite and an open-air rooftop pool with breath taking views of the city.

The spa is a ten minute walk away from the canal. A two hour spa session is the perfect way to round off a relaxing canal boat holiday. Your towel, robe and flip-flops are provided for you meaning there’s nothing for you to worry about. 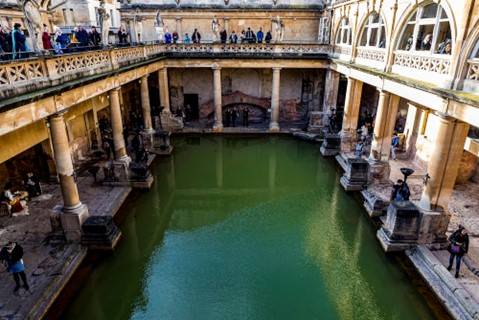 Bath is the home of some of literature’s most famous writers and characters. Mother of science fiction and author of Frankenstein, Mary Shelley, wrote the novel while living in Bath. Her house has been converted into a museum and visitor attraction which includes an 8 foot animatronic monster and escape room.

Shelley’s house is just a short walk from the Kennet & Avon canal and sits between the Queen’s Square and The Circus. While the attraction is family friendly, it’s more suitable for older children, and under 16s must be accompanied by an adult.

Jane Austen is one of the most celebrated female writers of all time, and is famous for Sense and Sensibility, Pride and Prejudice, Northanger Abbey, Persuasion, Mansfield Park and Emma. The Jane Austen Centre is set in a historic Georgian house on the last road Austen lived in Bath and offers a glimpse into how the city would have been back in the early 1800s.

The Royal Crescent is an impressive row of 18th century terraced houses, built in a crescent shape. The crescent is a Grade 1 listed building and originally consisted of 30 town houses. 10 are still town houses today, whereas 18 have been converted into flats, number 16 has become a Hotel and Spa and Number 1 is a museum celebrating the crescent.

The history of Bath Abbey stretches back to Anglo-Saxon times. In 1499, the Abbey as we know it today was built, in the 1539 during the dissolution of the monasteries, the Abbey fell into a state of disrepair.

In 1574 Queen Elizabeth I gave permission for the Abbey to be restored. This work was completed in 1620 and the Abbey was reinstated.

In 1833 major works were carried out at the Abbey, with changes made to its towers and an expansion with flying buttresses added. The Abbey is one of the largest examples of Gothic architecture in the UK and is a popular tourist attraction in Bath. 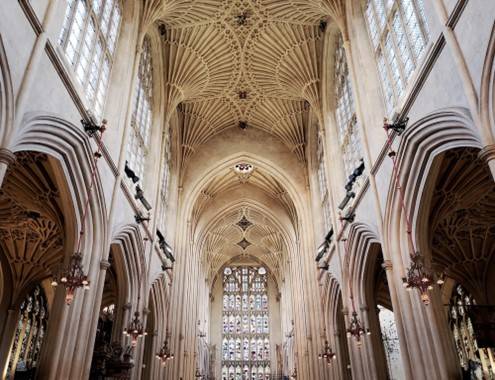 Bath is well known for a mixture of high street favourites as well as a wealth of independent businesses. Among these include the Topping Booksellers. The largest independent booksellers in the UK, a perfect match for a trip to the literary city.

There’s also a fantastic choice of fashion, interiors, record shops and even toy shops. There’s something for every taste whether you’re searching for a vintage gem at The Yellow Shop or clothing, accessories or something for the home from award winning boutique Found.

It's not just shopping that Bath has to offer, it’s also the perfect city for foodies. Take an afternoon tea in the Pump Room or bottomless brunch in the Green Park Brasserie. And, if you’re looking for vegan food, there’s plenty of options including Oak in the city centre. 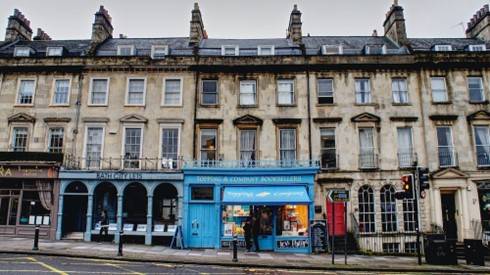 Exploring Bath by canal is the perfect way to experience all the city has to offer while also taking in the gorgeous scenery of the West Country. Here at ABC Boat Hire we offer a range of different routes from a quick break of 3-4 nights to 14 nights.

Bath and Return from Aldermaston Wharf

A relaxing 14 days trip starting at Aldermaston Wharf takes you across a quiet route along the Kennet & Avon Canal where you’ll visit the pretty villages of Kintbury, Little Bedwyn, Great Bedwyn and Crofton before landing in the historic towns of Devizes and Bradford on Avon. You’ll also see the ancient Savernake Forest as you cruise along. Eventually making your way to Bath along the Bath Deep Lock, one of the deepest locks in the UK.

Bath and Return from Hilperton Marina

A quick getaway to Bath from Hilperton Marina takes 3-4 days and runs through Bradford on Avon. Along the way you’ll see a medieval Tithe Barn, before hitting the Avoncliff Aqueduct and eventually reaching Bath through the Sydney Gardens.

If you want to hit two fantastic cities in the same trip, the Bristol Return from Hilperton Marina takes 7 nights and travels through the Avon valley, through Bath and onto Bristol where you’ll arrive at the floating harbour.

If you’re looking for a unique way to experience the UK, ABC Boat Hire is for you. Explore our featured routes and short breaks today. Take a look through the many locations you can explore with us or contact our helpful team today to find out more.