7 Wonders of the Waterway

Ever questioned what the 7 wonders of the Waterway are? On your next canal boat holiday, you can experience them all from our marinas with help from ABC Boat Hire. Whether you want to explore ‘The Cathedral of Canals’, discover the most impressive set of canal locks in the country or witness the longest, highest and deepest tunnel in the canal system, it’s all there waiting for you. Find out more about our wonders of the water today.

What are the 7 Wonders of the Waterway?

A play on words from the 7 Wonders of the World, the 7 Wonders of the Waterway are renowned narrowboat hotspots that are a must-see on any boater’s bucket list. Whether you’re a canal boat fanatic, a first-time boater or are looking for group weekend away ideas, visiting some of these staple attractions is a great place to start! 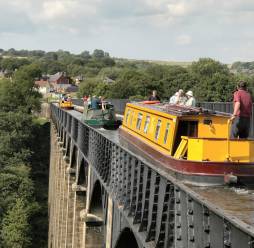 Situated 38 metres above the River Dee in Llangollen canal, the Pontcysyllte Aqueduct is renowned for being the highest and longest in Britain. The aqueduct was built between 1795 and 1806 and has been deemed as a World Heritage site – putting it in equal footing with the Great Barrier Reef. With 18 stone piers which support a 300-metre-long trough where the canal runs through, this huge 100 feet long and 125 feet high monument is not one to miss on your next journey along the waters.

This Pontcysyllte Aqueduct canal route is available from our Llangollen and return route.

Contested to be the largest set of 16 locks in a straight line, this monumental waterway attraction was designed by John Rennie as a solution to climbing the extremely steep hill in Devizes. With 16 out of 29 locks in a line, it’s arguably the most impressive set of locks in the UK – and designated as a Scheduled Ancient Monument (which is the same status as Stonehenge). These locks raise or lower narrowboats by 72m over the two-mile stretch – taking around six hours to travel through them.

Discover the Caen Hill Flight of canal locks on our Devizes & return route from Hilperton Marina. 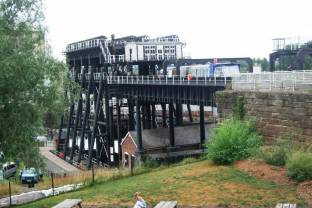 Ever heard of ‘The Cathedral of the Canals’? The Anderton Boat Lift is described as just that – situated 15 metres from the River Weaver on the way to the Trent & Mersey canal. This extraordinary structure was designed by Edwin Clark in 1875 to lift cargo boats to the Trent & Mersey canal, which is situated 50ft away. It consists of two watertight chambers (which are large enough to fit a pair of canal boats!) and this monumental engineering feat is still available for boat trips today through the lift from April to October.

Learn more about this intriguing edifice from our Anderton marina boat route.

Want to experience the longest, deepest and highest canal tunnel in the whole country? Meet the Standedge Tunnel. Tunnelling for over 3 miles nestled beneath the Pennines, this tunnel cuts through solid rock – taking the original canal builders 16 years to construct. Once this tunnel was opened in 1811, boaters then used this to pilot their boats through the underground warren. However, it’s important to note that today, boaters need to book their trip in advance through the Standedge Tunnel with Canal & River Trust.

The Pennine Ring from Anderton Marina route will lead you right to the Standedge Tunnel. 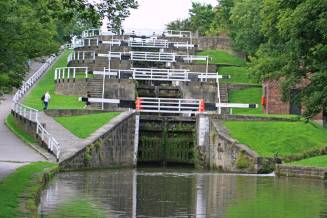 Operating as a spectacular ‘staircase’ flight, these renowned five-rise locks are a great wonder of the water not to miss on your next cruise through the waters. With the locks directly opening from one to another, the top gate of the lock forms the bottom gate of the next – creating a staircase effect. This 18th-century masterpiece was completed in 1774 and is still in daily use now – providing 16 miles of lock-free cruising.

The Bingley Five-Rise Locks can be found on the North Pennine Ring from Anderton Marina.

Designed by Sir Edward Leader Williams in 1893, this swinging aqueduct is unique to the waterways, and allows larger boats to pass underneath. The aqueduct consists of a metal tank with doors located on either end, mounted on a central pillar. The aqueduct weighs in at 1,450 tonnes and is 100 metres long, situated along the Manchester Ship canal – also known as the ‘Big Ditch’. The aqueduct is still frequently used daily by boaters.

Find out more about the Barton Swing Aqueduct on the Anderton to Boothstown route.

Known as ‘The Straight Mile’, the Burnley Embankment is a mile-long embankment that carries the Leeds & Liverpool canal above the town of Burnley. Reaching over 60 feet higher than the town, boaters can expect panoramic views of picturesque English countryside.

The North Pennine Ring route is the best option to see The Burnley Embankment.

Want to know about our wonders of the water and where you can visit them? Explore our canal boat routes, our locations or get in touch with us directly at ABC Boat Hire today.