After a short break on the Worcester & Birmingham canal in 2016, and a week on the glorious Llangollen canal in 2017, my husband David and I decided to try the Monmouthshire & Brecon canal in Wales.  Because of work commitments we only had a short weekend free to fit our trip in and so decided to pick our boat up Saturday morning, see how far we could get by mid-afternoon and then cruise back on Sunday morning.  We thought if we liked it we’d come back for a longer trip another time! 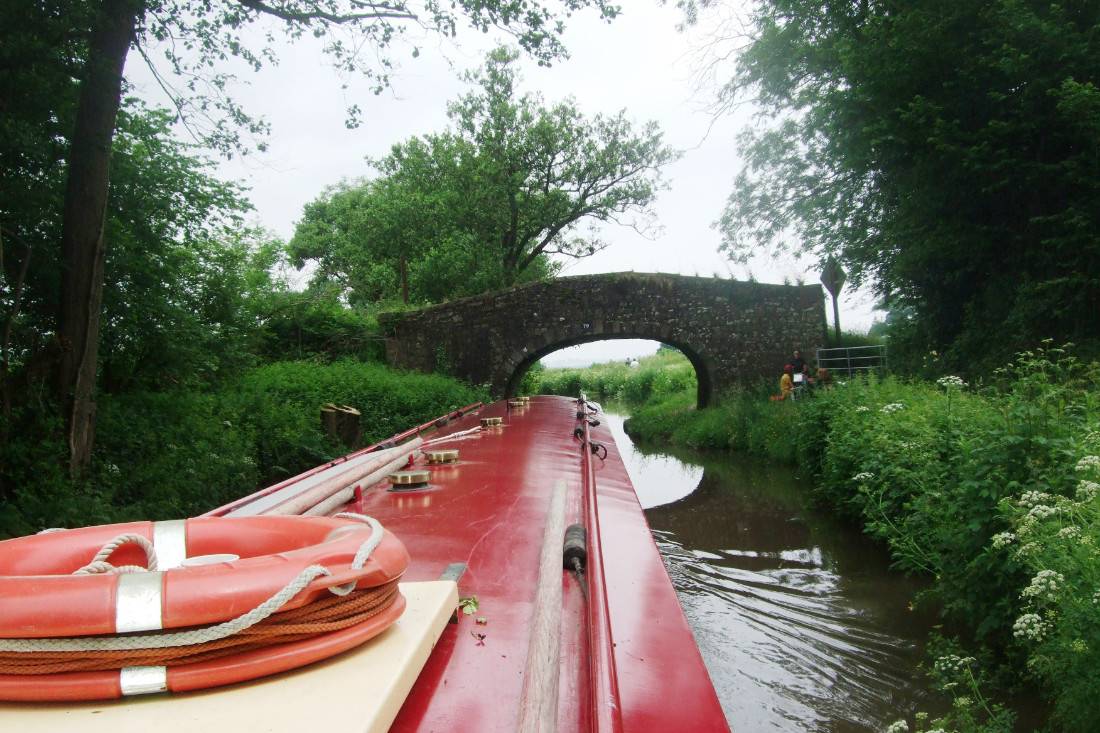 We set off from Worcestershire at 8am and got to Goytre Wharf, the home of Red Line Boats, at about 9.30am, to be greeted by the receptionist April.  April was really friendly and recommended to us that we buy a specialist guide book for the canal entitled ‘The Mon & Brec Guide’ written by John Norris and edited by Phil Hughes. It’s sold in the marina reception for £9.10 (2018 price) and apparently countless customers have commented that the book is brilliant, with loads of information about pubs, tricky bridges to get through, the tunnel, and of course the locks.

It also tells you where you can stop for water, provisions etc.  We didn’t buy one as I’d brought our own Nicholson’s Guide to the Welsh Canals which is also good, but in retrospect I think if we go back we will also get the John Norris guide – if you read the rest of this tale you’ll understand why…..

After saying hello we were then taken through a lock demonstration by Alix, another of the helpful administrators.  You might think you know all about locks but they are operated slightly differently on the Mon & Brec canal – the gates at the bottom of the lock are always left open.  Alix told us this is because the walls of the locks aren’t strong enough to hold a lock full of water for long periods of time, so the locks are always left empty and you have to remember to make sure the bottom paddles are open before you leave.

Lock demonstration finished, we were shown to our boat which had been moored up for us already facing the way we wanted to go (towards Brecon). We were guided round our boat by Ashley, who made sure we knew all the technical stuff about water, gas, diesel, battery charge etc.   He stayed on the boat with us for a few minutes as we set off just to make sure we were ok, and then we were off!

One of the things we’d heard about the Mon & Brec canal is that it’s very shallow, and no matter how experienced you are, you will get stuck from time to time. The marina had told us to try to keep to the centre of the canal as much as possible. 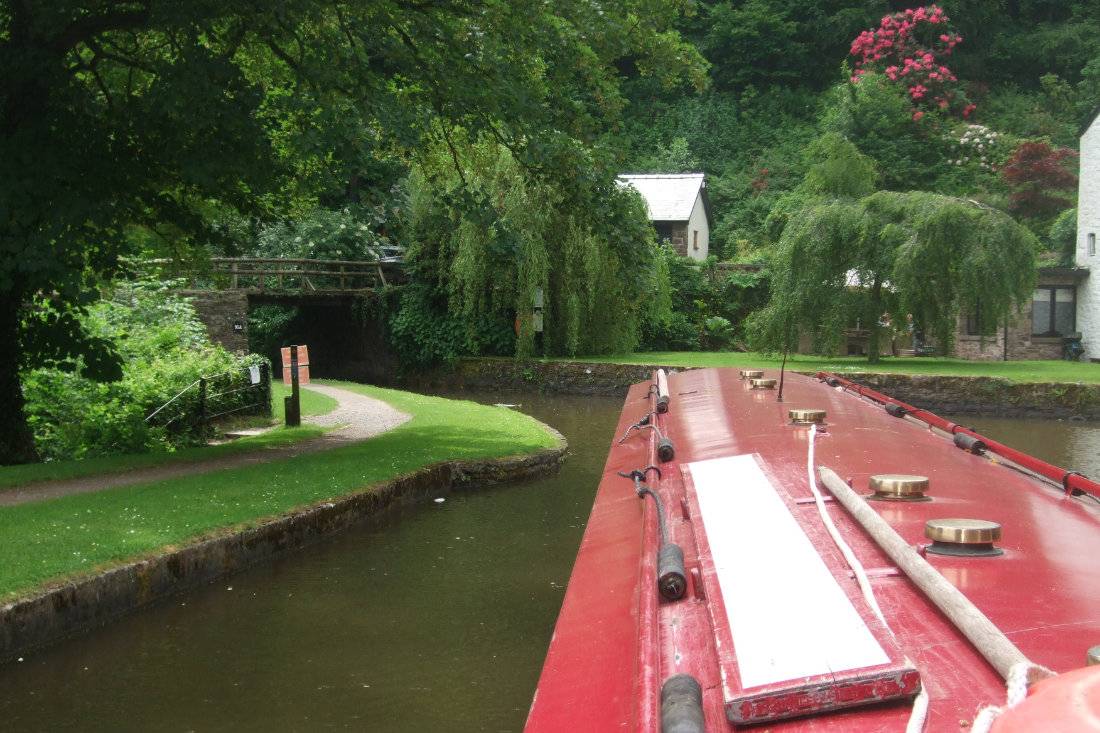 All went swimmingly until, near bridge 79, we had to move over to make way for a boat passing in the opposite direction – and immediately got stuck!  Trying to reverse off the bank didn’t work, so David got the boat pole out, I stood on the other side of the boat, and he pushed us off into the water again.

This canal and the surrounding scenery is truly beautiful; the canal meanders around many twists and turns, so take your time so that you can relax and enjoy it! On the west side of the canal are steep wooded hills, and on the east there are stunning views across the valley to Sugar Loaf Mountain, the southernmost peak of the Black Mountains at 1955ft tall.

With David on the tiller, I was just admiring some pretty yellow flowers on the canalside, when I noticed him jumping up and down waving his arms in a frantic manner.  New dance craze?  No, he had suddenly found himself in a cloud of midges and was trying to fight them off while hanging onto the tiller!  I went and fetched some insect repellent for him and they disappeared, disgusted with us for ruining their fun.

If you are at all interested in the history of this stand-alone canal, it was originally made for transporting coal and iron and was 2 canals; the ‘Monmouthshire’ and the ‘Brecknock & Abergavenny’. Both were started in the 1790’s and coal traffic rose from 3500 tons in 1796 to 150,000 tons in 1809. The arrival of the railways led to the canals being gradually closed in the latter half of the 19th century and early 20th century, and the canals were formally abandoned in 1962.  A few years later, National Parks legislation led to restoration of the canal as part of the Brecon Beacons National Park, and reopening started in 1970.  There are now 35 miles of navigable ‘Mon & Brec’ canal.

We had originally thought of trying to get as far as Llangynidr, but I’d plotted it on a canal planning website (canalplan.eu) and it was apparently 6 and a half hours’ cruising from Goytre Wharf.  I know I’m a ‘cautious driver’ so we are usually a little slower than the route planner.  With that and the fact that we’d already got stuck once, we decided not to be too ambitious.  Looking at our Nicholsons guide, there was a winding hole (where you can turn your boat)  at Gilwern, and then no more until just before Llangynidr, so we decided to see how long it took us to get to Govilon (just before Gilwern) and take it from there. 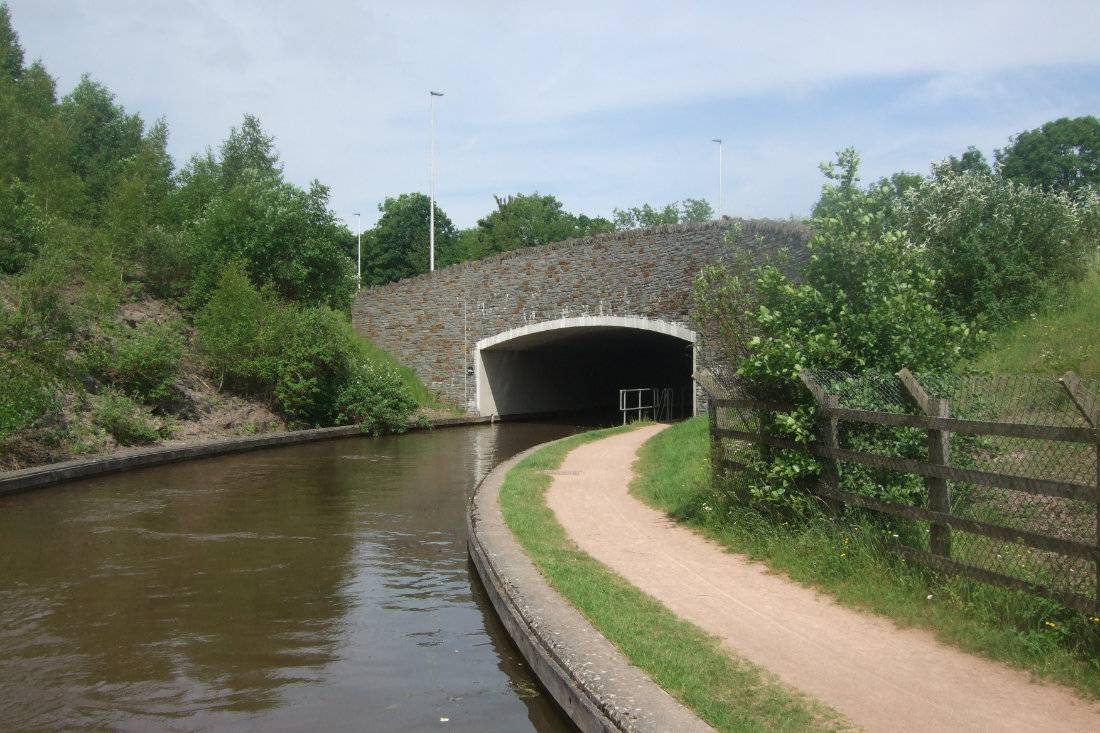 A peaceful cruise through more beautiful countryside brought us to the middle of Govilon, and it had only taken us 3 and half hours, so we decided to carry on to Gilwern and turn the boat there.

Upon arriving at Gilwern, there is a winding hole at the site of Castle Narrowboat’s marina – but as it was a busy handover day for them there wasn’t much room to turn due to all the moored boats, so after unsuccessfully trying to squeeze our boat round whilst not hitting anyone we carried on to the next winding hole just a few minutes further along the canal.  Turning was rather more longwinded than a standard ‘3 point turn’ due to the shallowness of the canal, but after much to-ing and fro-ing we got ourselves round and headed back to the Gilwern visitor moorings south of Bridge 103, where you can moor for up to 48 hours.

It was actually only another hour after Govilon to Gilwern, but after having travelled up the canal to turn the boat and then coming back down, we finally finished mooring up at about 4.15pm.

It was still a gorgeous sunny afternoon, so we walked down into the village to explore possible eating opportunities for the evening.  Gilwern is a sleepy village with a couple of shops, a couple of pubs, a chip shop, a village hall and not too much else around.  Both of the pubs were open, but we noticed that one was for sale and the other to let which made us feel a bit sad at the prospect that they might close, but at the time of writing this (November 2018) they are both still open!  We decided to return later and try the Beaufort Arms for our evening meal.

On the way back to our boat we passed the Red Chested Swallow, another boat from the ABC fleet.  We had a chat with the group of charming gentlemen on board who told us they’d got their boat for a week so were going all the way to Brecon. We all promised not to be noisy as we were moored up next to each other!

Our meal at the Beaufort Arms was lovely, good wholesome pub grub.  I had Chicken Kiev and David had scampi and both were nice, tasty and hot.  Afterwards, David had put a bottle of Prosecco on our boat and it was a warm evening, so we sat at the bow, sipping our wine and looking out at the breathtaking nature all around us. We relaxed, luxuriating in the greenery and birdsong, and then talked about our values, shared aims and what matters to us in life.  And that’s the magic of a canal boat holiday – in the words of the poet W.H. Davies “What is this life, if full of care, we have no time to stand and stare?”

And so to bed, where we slept like logs.  Nothing to do with the alcohol of course, just the peace and quiet.

Sunday morning I cooked us some sausage butties while David checked our weed hatch and found the branch of a tree!  We set off at 10.45am for our leisurely cruise back to the marina.  We seemed to be getting better at avoiding getting grounded, especially when going round sharp bends and passing oncoming boats.  We agreed that we were taking things a bit more slowly than on the previous day and actually making better progress as we didn’t have to stop to get ourselves unstuck! After Bridge 93 there was a stretch of canal with a beautiful canopy of trees overhead and views of bright sunshine over the Welsh fields and valleys.

Upon regretfully handing our boat back at Goytre Wharf, Alix told us that there was in fact another winding hole at Llangattock Wharf (about an hour further on from where we had turned our boat the day before) and that if we had bought ‘The Mon & Brec guide’ we would have known about it.  The road from LLangattock leads down to the town of Crickhowell where there is a mediaeval stone bridge, remains of a Norman castle and a selection of pubs and cafes.  Next time perhaps!

download a pdf of this blog along with more photos